Props allow top-down communication with the widget - the widget's host uses attributes to pass data down to the ezFlap widget using attributes.

We use the @EzEmit annotation to define an event in the hosted widget: 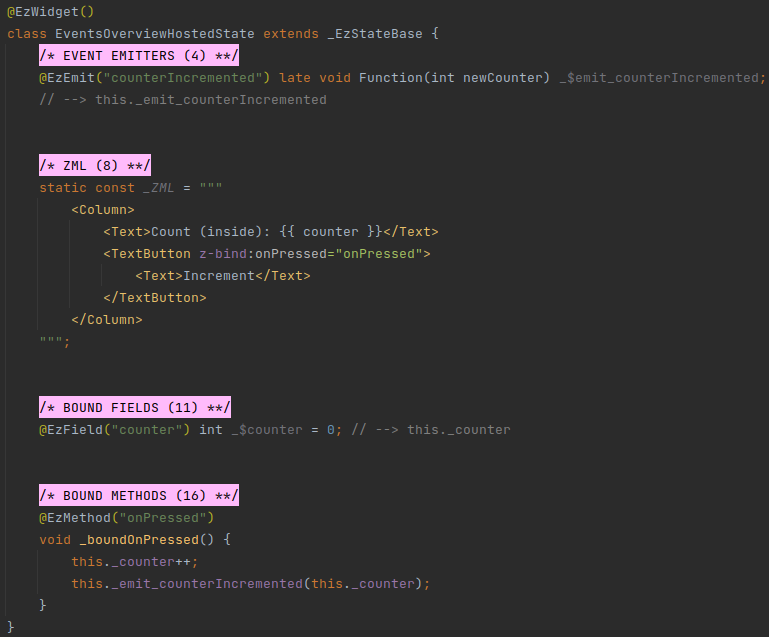 We use the z-on attribute prefix to register a bound method of the host widget as a listener for the event: 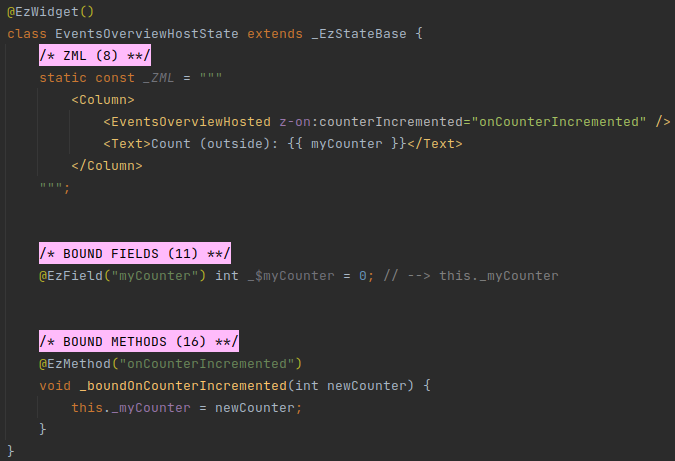 When the user presses the TextButton in the EventsOverviewHosted widget - the local counter bound field is incremented, and then broadcasted in the counterIncremented event.

This causes the onCounterIncremented event handler to be invoked, and assign the new counter (which is passed to it as a parameter) to the local myCounter.

It is not mandatory to register listeners to events.

When no listeners are registered to an event - the event is ignored.

Events are defined in the widget that emits them (i.e. in the hosted widget).

Events are defined using fields of type Function that are annotated with the @EzEmit annotation.

The signature of the Function type determines the data that will be sent with the event.

The value passed to @EzEmit as parameter is the event's Assigned Name.

Events do not return values, and so the Function in their type needs to have a void return type.

Event handlers are defined and registered to events in the host widget, using the z-on attribute prefix.

Attributes prefixed with z-on are assigned to events in the hosted widget by matching their names against the Assigned Names of the hosted widget's events (i.e. the value passed to each event's @EzEmit annotation). 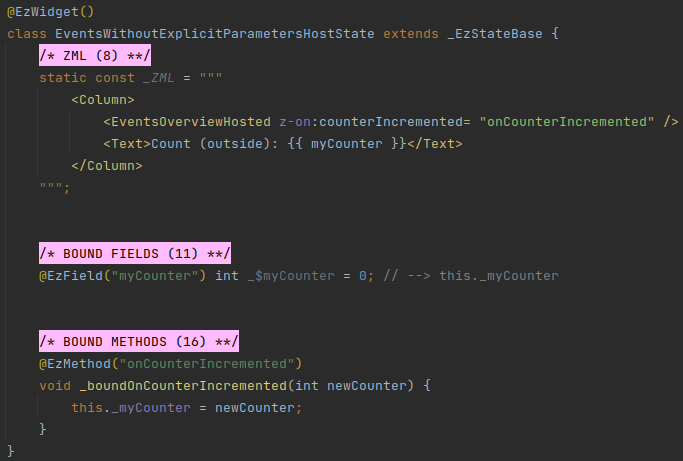 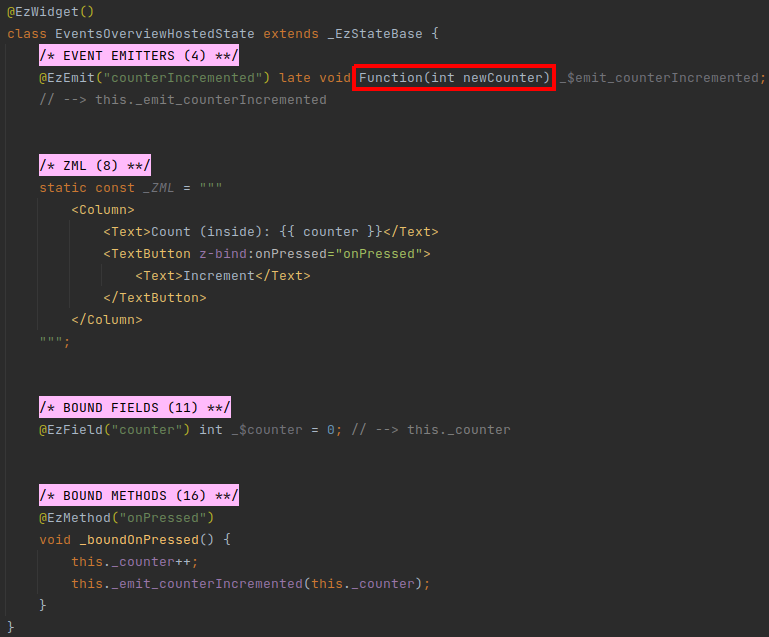 WHEN IS IT USEFUL?

Registering a bound method with an event listener without explicitly specifying its parameters is useful when the event has parameters that we want to receive. 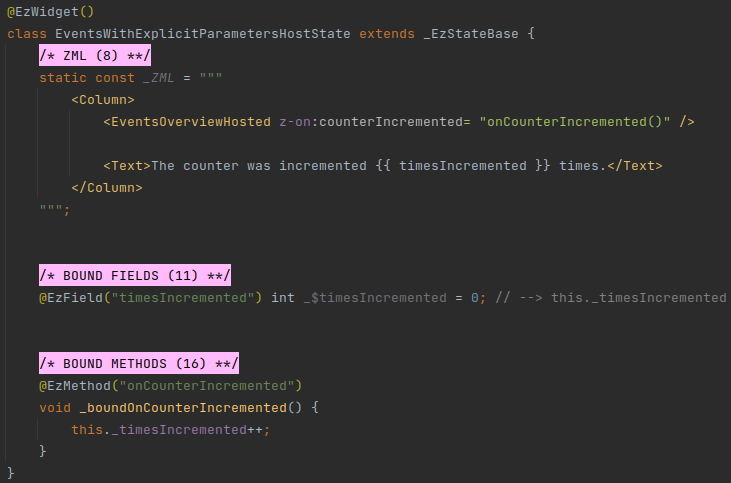 The event includes a single integer parameter for the new value of the counter, but the host's onCounterIncremented function accepts no parameters.

In the above example, we don't care about the actual value of the counter, but only about the number of times it was increased.

Therefore, we have no need for the updated counter value, and we don't need to accept any parameter.

We express this by explicitly providing the parentheses in

This technique is commonly used when working with loops.

Imagine that we want to have multiple counters, with a button next to each one.

Whenever a button is pressed - its counter needs to increase by one.

We can implement the UI with a z-for loop, but we need a way to pass the index of each counter to the method that will increase it.

This is how it can be done with a native TextButton and a bound method, without an event: 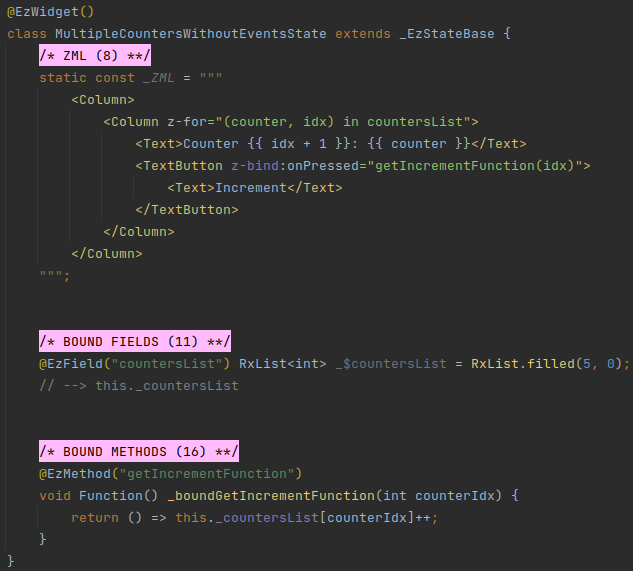 In the above example, we use z-bind:onPressed to assign a handler for the native Flutter onPressed callback of TextButton.

Instead of passing a bound method directly, we call getIncrementFunction with the current counter's index as parameter, and pass its result to onPressed.

getIncrementFunction returns a void Function() that increments the specific counter.

So, technically, five separate handler functions are created, one for each counter, and each one is passed to the onPressed parameter of the TextButton of a counter.

This can be simplified by creating a wrapper widget for TextButton, and instead of accepting the onPressed handler with z-bind - emit an event, and handle it with a z-on attribute with the index passed as an explicit parameter.

This way, it's not necessary to implement a getIncrementFunction method that creates the actual handler functions. 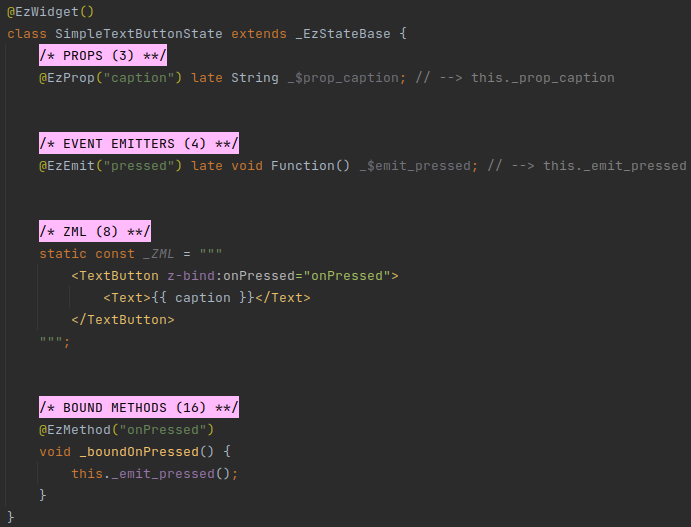 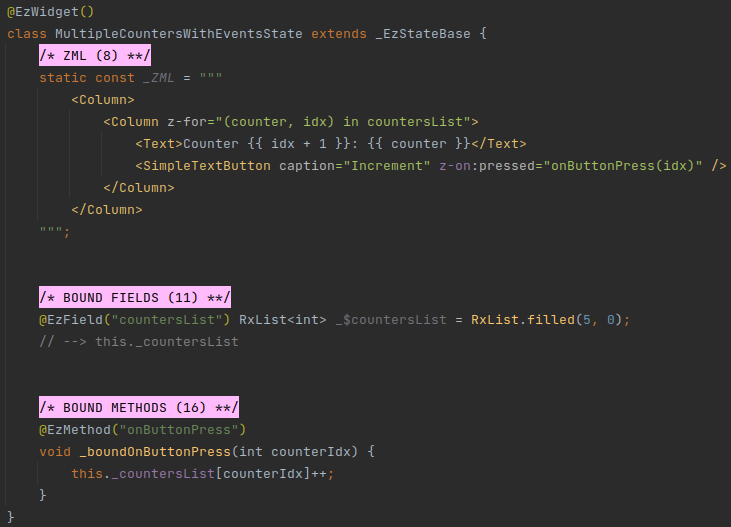 The ezFlap core widgets package offers such a widget out of the box: EzTextButton.

It is not possible to combine the two modes.

In other words, it is not possible to have the event handler functions receive both local parameters that are passed using the explicit parameters syntax, and also receive parameters sent with the event from the widget that emitted it.

Events can be invoked from code.

When invoked from code, an event emitter is accessed using the Derived Name of its declaration.

It is possible to check whether a particular emit handler is available (i.e. if one was provided by the host widget using z-on) with the hasEmitHandler method.

Pass the Assigned Name of the event as the emitKey to check if a z-on was provided for the event.

Events can also be invoked directly from ZML, by assigning them to z-on or z-bind attributes: 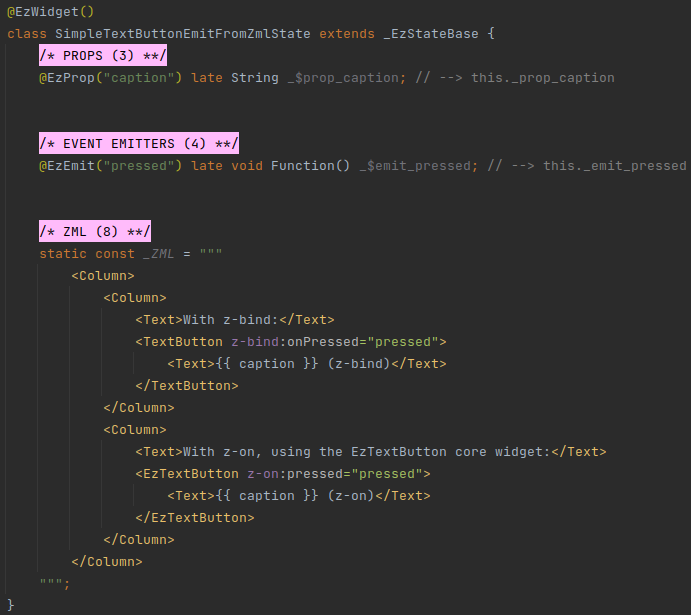 Both the z-bind and z-on emit the same pressed event, which can be caught exactly the same as we've seen before: