Props allow top-down communication with the widget - the widget's host uses attributes to pass data down to the hosted widget using attributes.

Models allow bi-directional communication by letting both the host and the hosted widgets update and read the same piece of data.

For example, imagine a widget that wraps around a TextField widget to handle the controller logic in a black box, and synchronize the text entered by the user with the host widget using z-model: 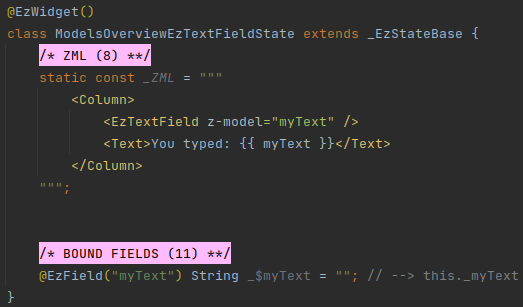 In the above example, a text field appears, and the text that is typed in it is rendered underneath.

Read about EzTextField and other useful ezFlap core widgets in Core Widgets.

The syntax of using z-model as a whole attribute rather than a prefix is explained under Syntax below.

We use the @EzModel annotation to define a model in the hosted widget: 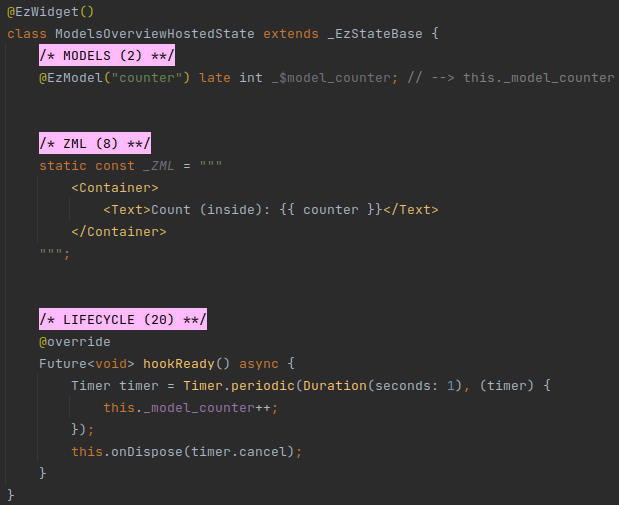 We use the z-model attribute prefix to pass a bound field of the host widget into the model of the hosted widget: 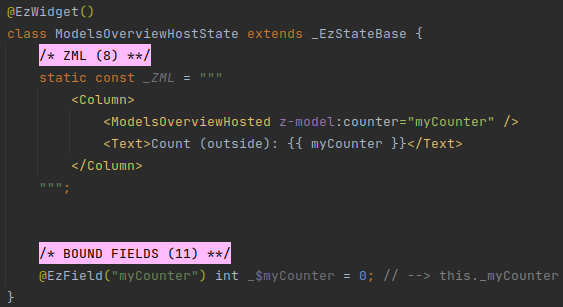 The ModelsOverviewHosted widget increments the model by 1 every second.

Whenever the value of a model changes, whether from inside the hosted widget or outside - the hosted widget's build() method is called automatically, and the display is refreshed to reflect the new value.

Models that are annotated with @EzModel are mandatory.

Mandatory models must be declared with late:

Models can also be optional.

Optional models are annotated with the @EzOptionalModel annotation.

Host widgets pass data into optional models the same way they pass it into mandatory models: with the z-model attribute prefix.

Optional models can be accessed by the hosted widget even when the host widget does not pass a value into them. 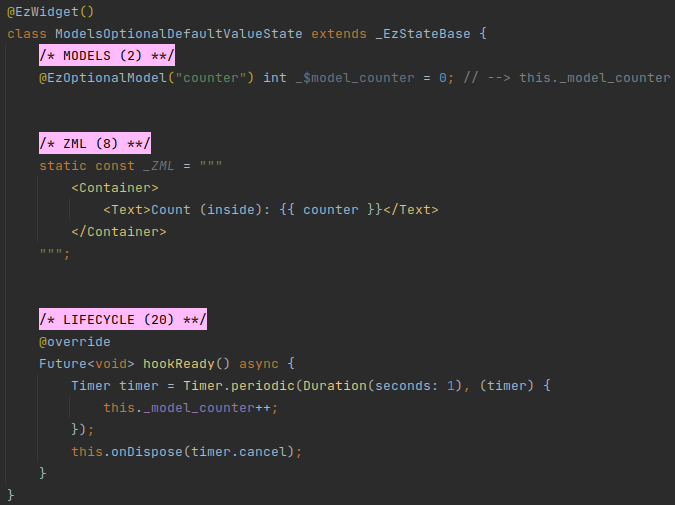 In the above example, if the host widget doesn't pass a value into the counter optional model, then ezFlap will generate an "alternative" reactive variable to represent the model.

The hosted widget can render the model and modify it as if it were a "real" model passed down from the host.

Changes to the "fake" model will reflect in the UI as expected.

The name following z-model corresponds to the model's Assigned Name (which is, as usual, the string that is passed as parameter to the @EzModel or @EzOptionalModel annotation).

There can exist a single unnamed model per widget.

To define an unnamed model - we use the @EzModel annotation without a parameter: 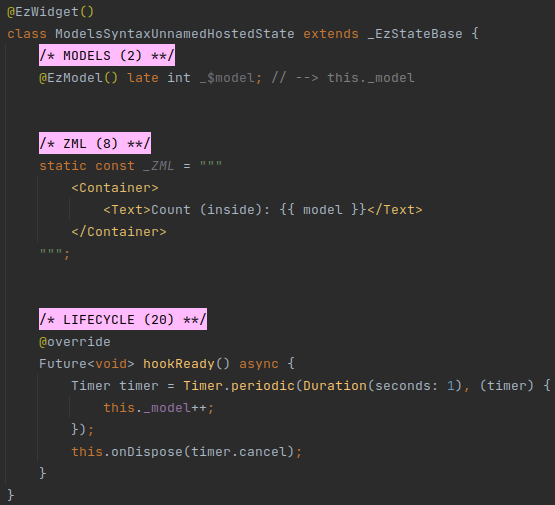 We use z-model as the entire attribute rather than just a prefix in order to pass data into an unnamed model: 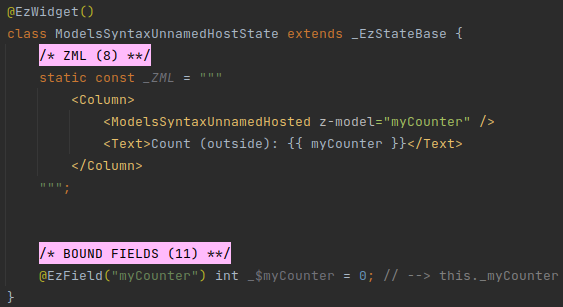 An unnamed model is automatically given the Assigned Name: model.

Models can be used in the same places where bound fields and other reactive data can be used.

When used in code, a model is accessed using the Derived Name of its declaration.

The Derived Name of:

We can check if an optional model has actually been provided by the host:

A helper method to check the model's type is available for every model.

This can be useful when the model's field is of type dynamic, and the actual type of the data passed from the host widget is only known at runtime, and we need to use different logic for different types (e.g. to do automatic type conversions, etc).