Use the z-if attribute to control whether a widget is rendered or not.

Use the z-show attribute to control whether a rendered widget is actually displayed or not.

z-if accepts a Dart expression that evaluates to a boolean.

z-if expressions can reference any data that is exposed to the ZML:

These are covered later in this guide. 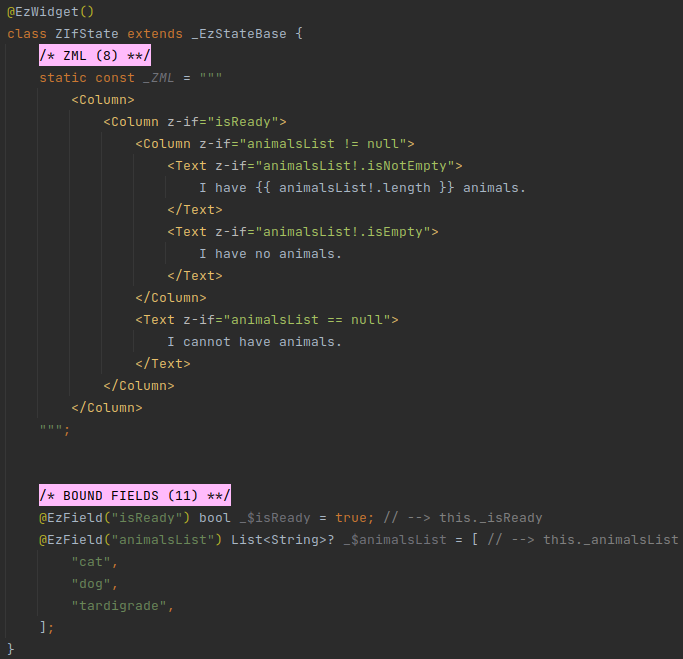 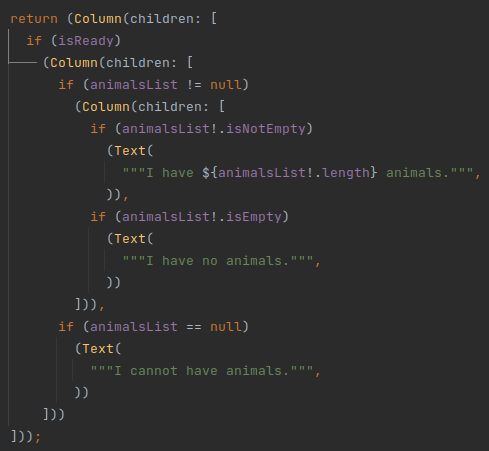 When a z-if expression evaluates to false - the widget is not rendered.

z-bind, z-for, and any other Dart expressions provided to the widget or to its children are not evaluated.

The rules that apply to z-if expression evaluation are the same as the rules applied to any Dart expression.

The expression is evaluated from left to right, and as soon as it is determined that it cannot evaluate to true - the evaluation stops.

So, for example, this is allowed: 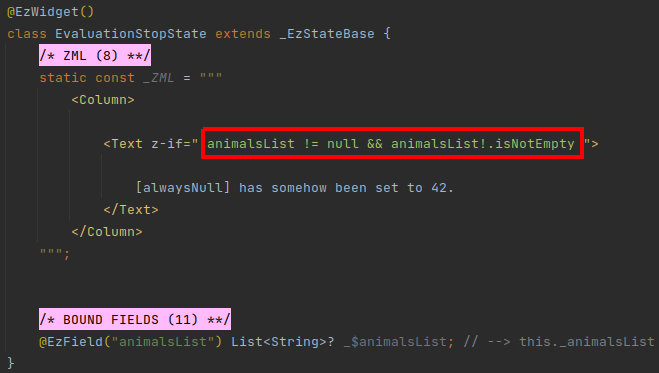 In the above example, the value of animalsList is null (because it is Nullable, and not explicitly initialized).

Nevertheless, the expression doesn't crash on animalsList.isNotEmpty because it stops evaluating when animalsList != null is evaluated to false.

z-show accepts a Dart expression that evaluates to a boolean.

ezFlap wraps widgets that have the z-show attribute with a Visibility widget.

The Visibility widget is initialized with the following parameters: 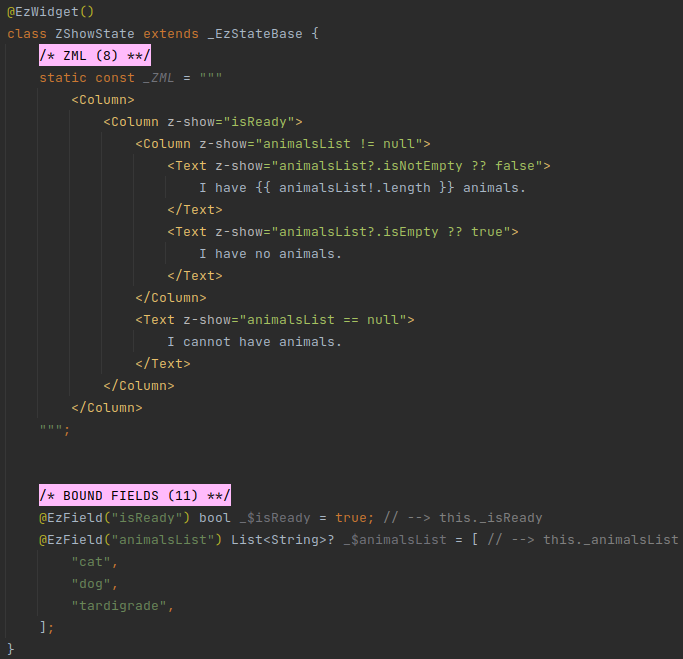 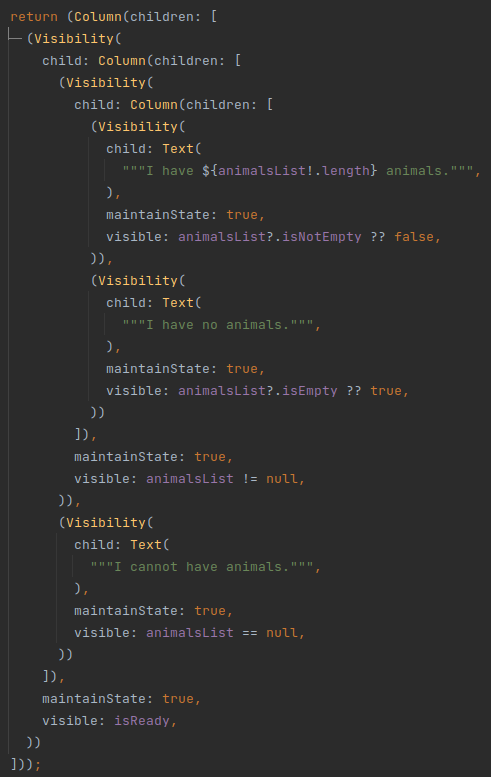 WIDGETS WITH Z-SHOW ARE ALWAYS RENDERED

Remember that, unlike z-if, widgets with z-show are always rendered, even if the z-show expression evaluates to false.

This is the reason we have an expression like animalsList?.isEmpty ?? true instead of animalsList!.isEmpty.

This expression is on a Text widget that is inside a Column widget with z-show="animalsList != null".

However, the Column widget is always rendered, and so the z-show expressions on the widgets inside it can get evaluated when animalsList is null.

Therefore, we need the ? (in animalsList?.isNotEmpty), in order to make sure we don't access isNotEmpty on null. We also need the ?? false at the end, because z-show expects a boolean value.

z-if can be placed on a class tag alongside z-show.

When provided together, the z-if is applied first, and so if it evaluates to false - the widget is not rendered, and neither is the Visibility widget that is added by the z-show attribute. 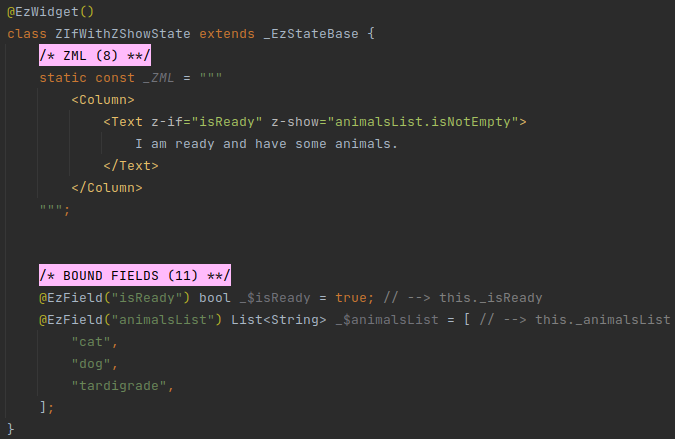 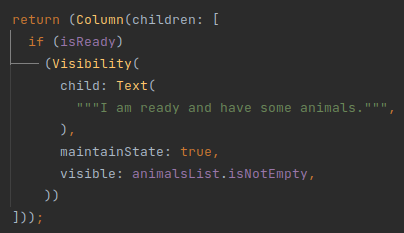 z-if can be placed on a class tag alongside z-for.

When provided together, the z-if is applied to each generated widget separately.

In other words - when provided together - z-for is applied first.

The expression in the z-if can access the z-for value, key, or index variables.

z-show and z-for together behave similar to z-if and z-for, and each generated widget is wrapped with its own Visibility instance. 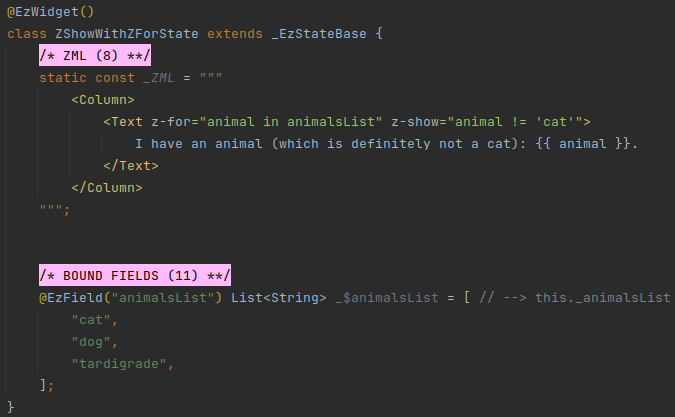 The entire triplet of z-if, z-show, and z-for can appear together on the same class tag.

In such case, z-for takes priority, then the z-if is applied on top of Visibility instances that wrap each generated widget. 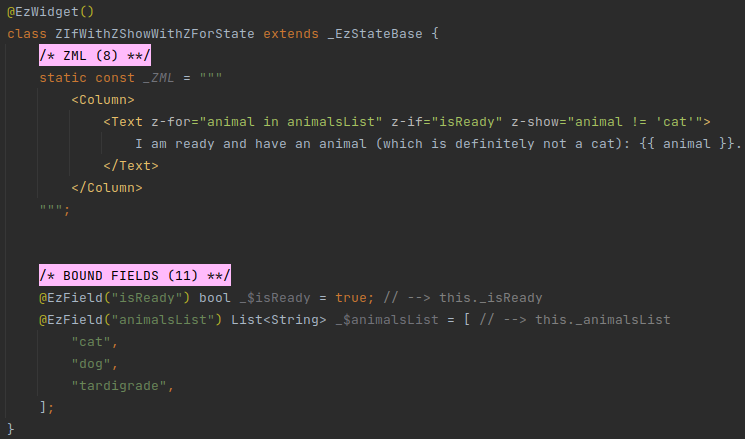 In the examples above z-if is always applied to widgets that are passed to the containing widget's children parameter. 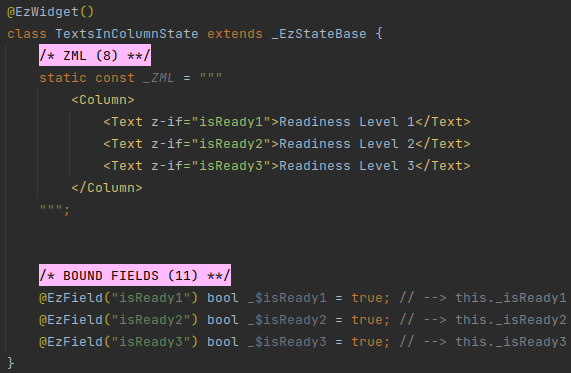 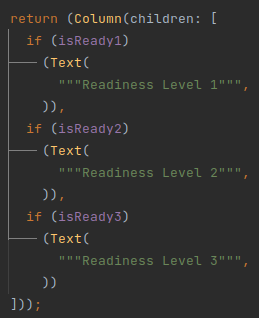 There are three Texts in the example above.

It's possible for all three to be rendered at the same time, or only a couple, or just one, or zero.

All of these variations are acceptable, because the containing widget is Column, which has a children parameter (i.e. and not child).

But what if we want to render only one of the Texts at any given time? 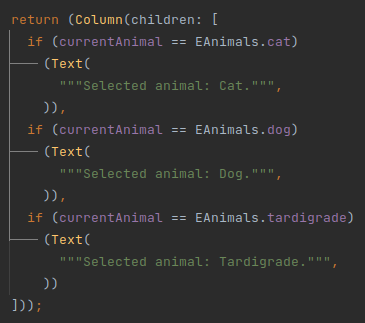 If all unnamed children of a class tag are mutually-exclusive (i.e. only one of them can be rendered at any given moment) - then we can place them in a widget that has the child parameter (i.e. and not children).

For example, we could place them in a Container: 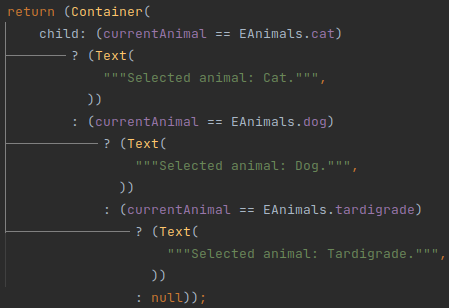 ezFlap automatically provides a fallback, to be used if the z-if expressions of all of the Texts evaluate to false.

The fallback depends on whether the single-child parameter is nullable or not.

If it is nullable - the fallback would simply be null.

Otherwise - the fallback would be an empty Container (i.e. Container()).

It is the developer's responsibility to ensure that the z-if expressions of the unnamed children class tags are mutually-exclusive.

If they are not - ezFlap will not detect it in compile time; there will be no compilation or runtime error.

Which unnamed child will be rendered when more than one z-if evaluate to true is undefined.