ZML is the XML-based language ezFlap uses to render and control widgets.

The ZML is used by ezFlap to generate the widget's build() functionality.

It can be provided in one of two ways:

The ZML can be provided as a parameter to the @EzWidget annotation.

The provided ZML needs to be a const String.

The common practice is to create a separate, abstract class, and define the ZML inside it, in a static const ZML field:

And then, pass it to @EzWidget of the widget class:

ZML tags and attributes map to Flutter widgets and their parameters.

Some special-purpose ZML tags and attributes affect the rendering, flow, and logic in special ways.

All special-purpose tags and attributes are covered in this guide (in this and in later chapters).

As explained in the ZML introduction, there are two types of ZML tags:

Class Tags can have attributes; Parameter Tags have no attributes.

There are three types of Parameter Tags:

Class Tags and all types of Parameter Tags are described below.

A ZML block must always have exactly one root tag, and this root tag is always a Class Tag. 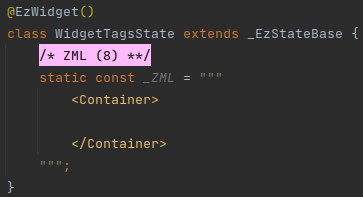 In the above example, there is a single Class Tag: <Container>, which is a reference to Flutter's Container native widget.

This class is a valid ezFlap widget, that will always render (i.e. build()) a single, empty Container. 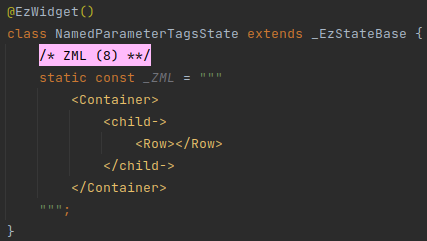 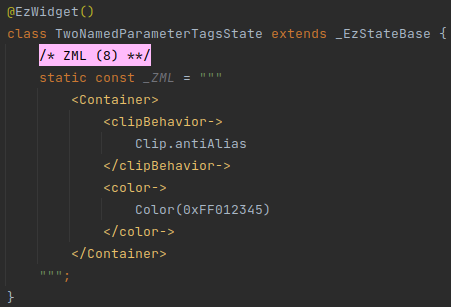 Remember that the content of Named Parameter Tags is either Class Tags, or a Dart expression.

ezFlap determines automatically which one it is; if it's an XML tag - then ezFlap treats it as a Class Tag. Otherwise - as a Dart expression.

When writing Dart expressions inside Named Parameters - make sure that the expression evaluates to the same type as expected by the widget's parameter.

For example, for Container.clipBehavior a value of the enum type Clip must be provided.

IN CASE OF A MISTAKE

If your Dart expression evaluates to an incompatible type - the compiler will complain and direct you to the right spot in the generated code (i.e. in the widget's .g.dart file).

From there, it should be simple to figure out where the mismatch is in the ZML code. 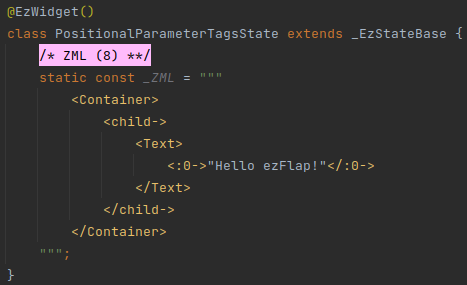 WHAT'S WITH THE QUOTES?

You may have noticed the double quotes around the Hello ezFlap! text in the ZML.

They are needed because the content is a Dart expression. Without the quotes it would be just Hello ezFlap!, and this is not valid Dart syntax.

Thanks to the Transformations feature, when using <Text>, we can omit the quotes and even omit the Positional Parameter Tag itself, like this:

This is covered in detail in Transformers.

Unnamed Parameter Tags are Class Tags that are placed as the direct children of a Class Tag.

Unnamed Parameter Tags can be used when the parent widget has a child or a children parameter (but not both). 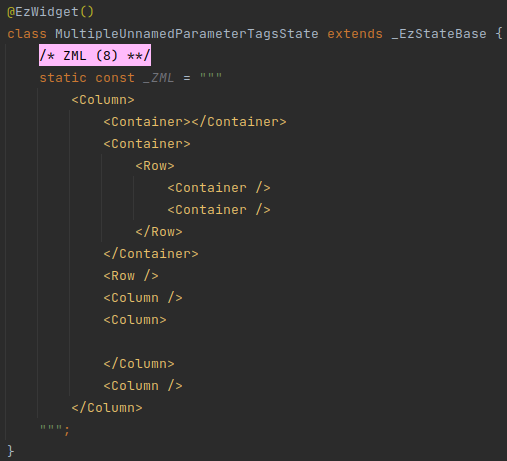 In the above example, the child and children parameters of Column, Container, and Row are not specified explicitly.

ezFlap figures them out automatically and generates the correct build() code.

It is our responsibility to not put multiple Unnamed Parameter Tags in a Class Tag that has a child parameter.

If we accidentally do this - ezFlap will report an error in the next build, and will not generate code for the widget.

Unlike Parameter Tags, Class Tags can have attributes.

There are different kinds of special-purpose attributes and attribute prefixes; they will be covered in depth in the remainder of this guide.

For now, we will focus on three of them: 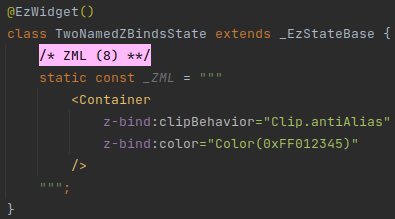 Attributes with the z-bind prefix are mapped to the class' constructor's parameters, and their values are always Dart expressions.

We have seen how to pass data to the parent class' constructor using Named Parameters and Positional Parameters.

z-bind is another way to do this.

z-bind attributes can also be used to pass data to positional parameters.

In such case, the attribute name (i.e. following the z-bind: prefix) is the zero-based index of the desired positional parameter.

z-bind attributes are effectively the same as Tag Parameters, except that:

Another type of attributes is prefix-less attributes.

Prefix-less attributes are processed by ezFlap as strings, and not as Dart expressions.

In the above example, we pass the text "Hello ezFlap!" in the prefix-less title attribute.

Note that we don't need to put quotes around the text, because ezFlap processes it as a string, and not as a Dart expression.

Prefix-less attributes can also be matched against by ZSS Selectors.

When a prefix-less key attribute is used - a String key is created automatically.

When we provide text in a prefix-less attribute - ezFlap processes Mustache snippets inside it.

The same also happens when passing text inside a <Text></Text> tags pair.

Everything inside a mustache is treated as a Dart expression.

ezFlap will generate the following build() code for the above widget:

ezFlap does additional processing beyond handling mustaches, with rules that are similar (but not identical) to the rules of HTML:

By default, when ezFlap processes a Class Tag, it uses the class' default constructor.

We can instruct ezFlap to use a different constructor by providing the constructor's name in the z-constructor attribute.

For example, if we want to use the Text.rich() constructor of <Text>, we can write: 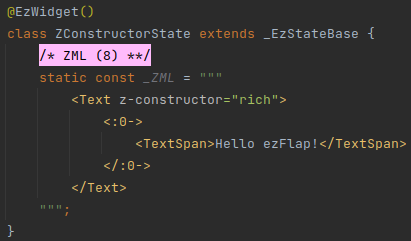 When a ZML tag or attribute begins with an underscore - it is considered to be commented out: 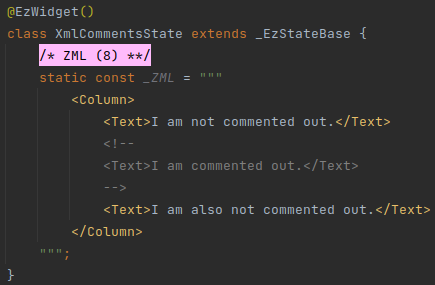 Remember that all classes referenced from the ZML need to be imported into the file.

These classes are referenced from the generated build() method (i.e. in the .g.dart file), and Dart needs them to be imported in the non-generated class file in order to compile the application.

However, ezFlap itself also relies on these imports when generating the code; it uses analyzer (opens new window) to figure out things like the types of the constructor parameters that are passed in a Class Tag.

Therefore, if a library of a class used in the ZML is not imported - ezFlap will output Cannot find the class corresponding to tag and not generate the .g.dart file.

For example, if we use <Card> but forget to import package:flutter/material.dart: 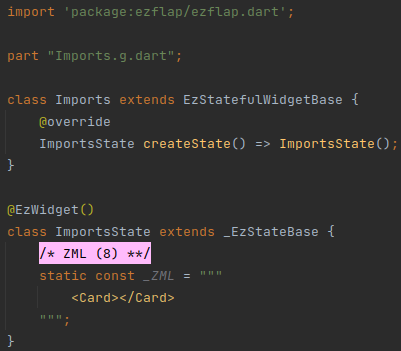 We get this error: