Computed Methods are methods with the @EzComputed annotation.

Computed methods are invoked when ZML that references them is rendered.

The value a computed method returns is used in the ZML, in the spot where it is referenced. 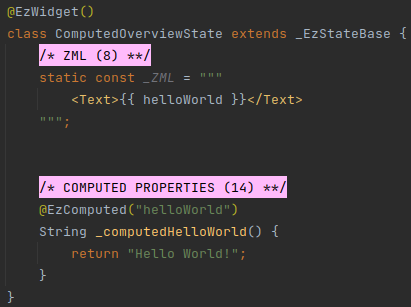 Computed methods are useful when we need to perform a transformation of some data before exposing it to the ZML. For example, we might want to format a string or filter a list.

When a computed method accesses other reactive data (e.g. such as a bound field) - it becomes "dependent" on this data.

To see an example for the reactivity of computed methods, let's look at a variation of the example from the previous section: 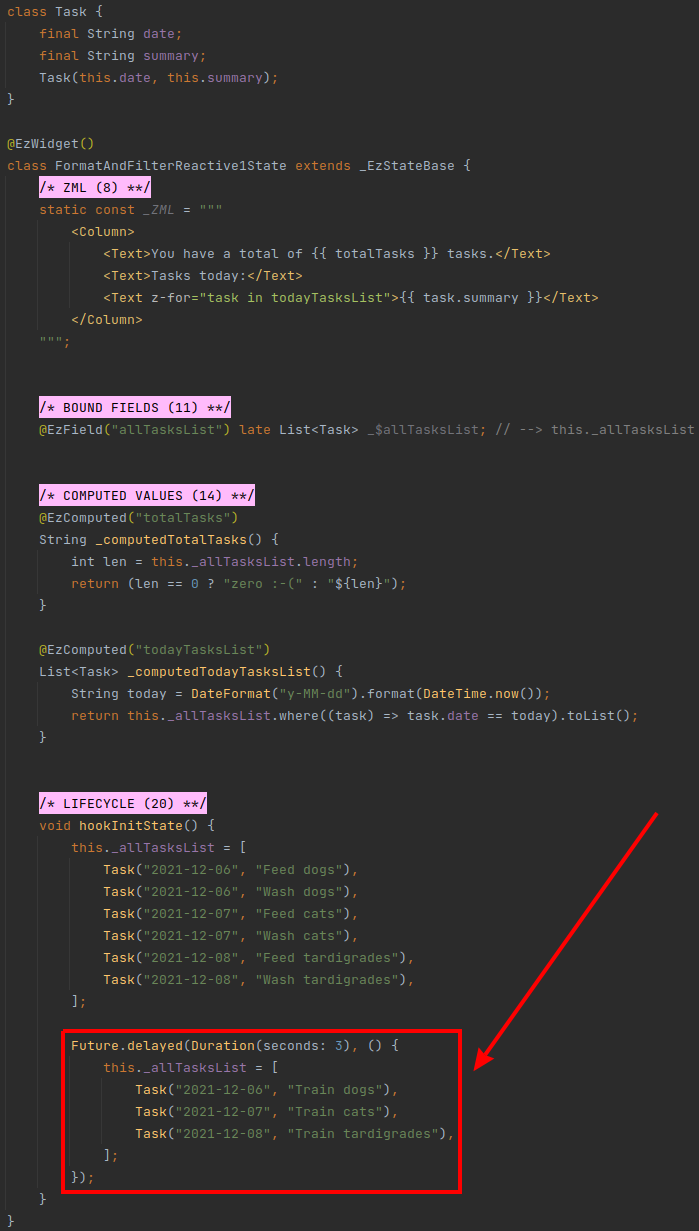 In the above example, the UI will change after three seconds because the bound field _allTasksList is set to a new List instance (and bound fields are reactive).

However, if we were to manipulate the existing list (e.g. add or delete an item) instead of assigning a new List instance to _allTasksList - then the UI would not update.

This is because the bound field itself is reactive, but if its value is an object - then the object itself needs to support reactivity in its fields and methods.

In other words, the object's internal state needs to be reactive in order for changes to automatically invoke the widget's build() method.

We can change the above example to use RxList instead of List to achieve this: 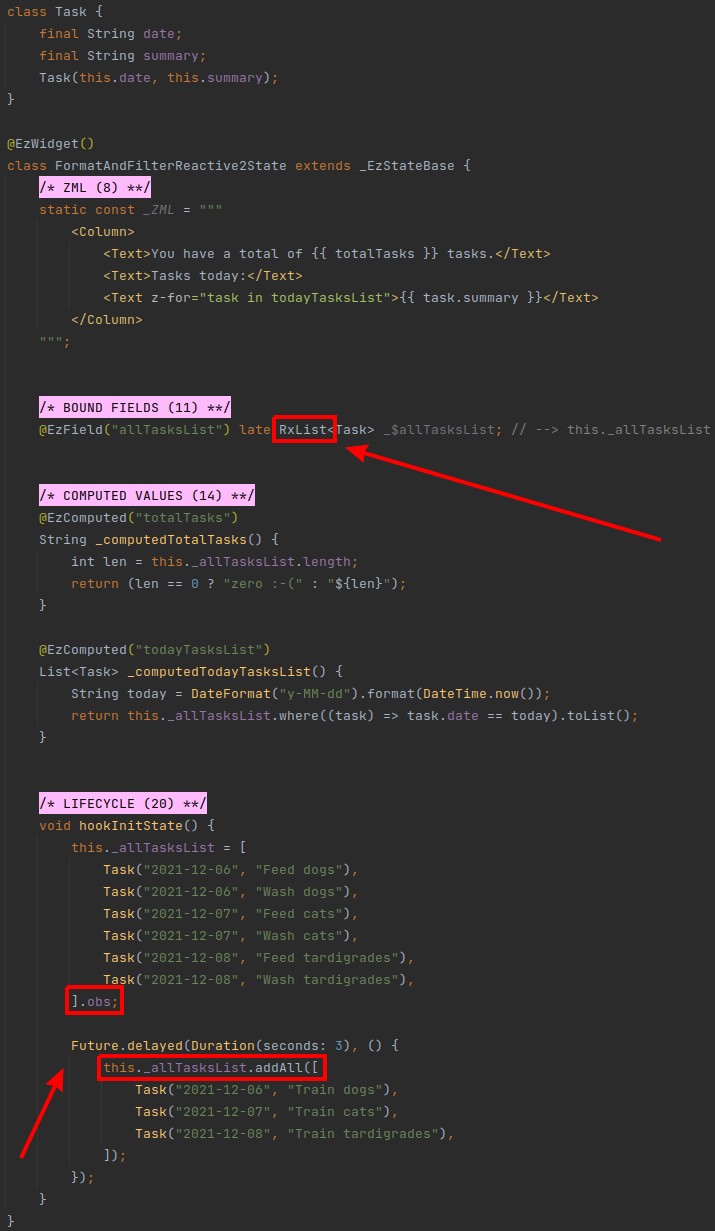 Assigning new Task instances to existing elements in _allTasksList will also be reactive.

If we make Task mutable, and then write code that changes the values of the fields in _allTasksList Task instances - these changes would not be reactive, and so would not update the UI.

To make it reactive, we need to make some small changes.

These changes, as well as the GetX (opens new window) reactive classes are covered in Reactive Data Entities.

When a computed method is invoked by the ZML for the first time - the return value is cached.

Whenever the widget is re-built - the cached value is used.

If the computed method accesses reactive data (e.g. a bound field) - the cached value will be invalidated when the underlying data is changed.

Some computed methods can be trivial, but some may be computationally-heavy. In the example above, todayTasksList filters _allTasksList. With large lists, this can become resource-consuming.

By caching the result, we make sure that computed methods are not re-invoked unless their underlying data has actually changed.

So, if the widget's build() method is called because some other reactive data has changed (i.e. not data that the computed method depends on) - then the widget will be built with the cached value, instead of re-running the filter.

Computed methods are written like regular Dart methods, and are prefixed with the @EzComputed annotation.

In the ZML, computed methods are referenced with their Assigned Name without parentheses. 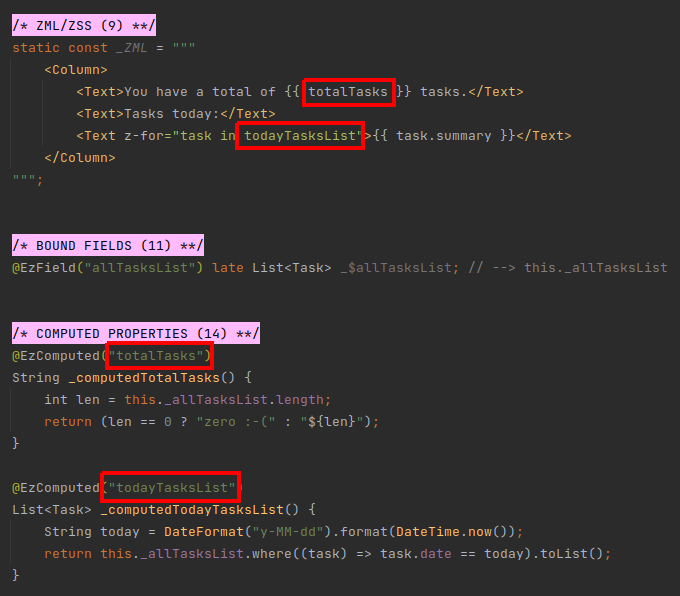 Such actions are considered side effects, and should not be done from within a computed method. 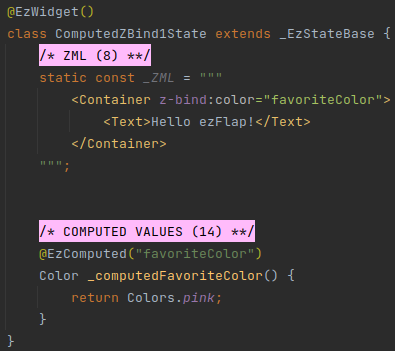 In the above example, the background color of the Container will be pink.

# Example 2 - use Computed Method With an Expression in z-bind 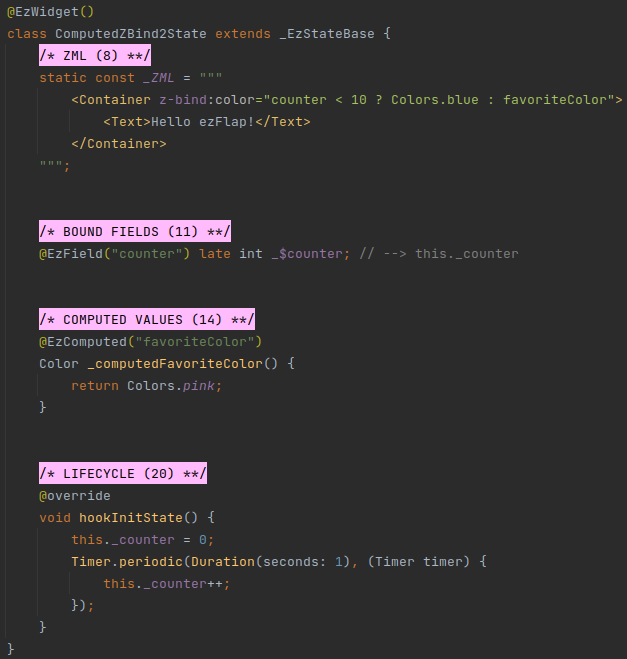 In the above example, the background color of the Container will be blue for 10 seconds, and then will switch to pink.

Example 2 above does not stop the timer when the widget is disposed.

Cleaning up when the widget is disposing is important, and easy, by passing a callback to this.onDispose() function. This is covered in Disposing. 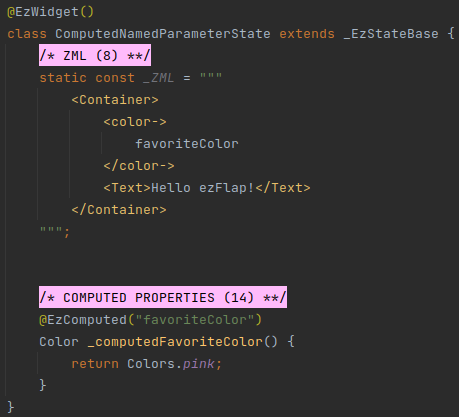 Computed methods can be referenced inside mustache expressions ({{ }}) in a text block (e.g. in <Text>, or in string attributes). 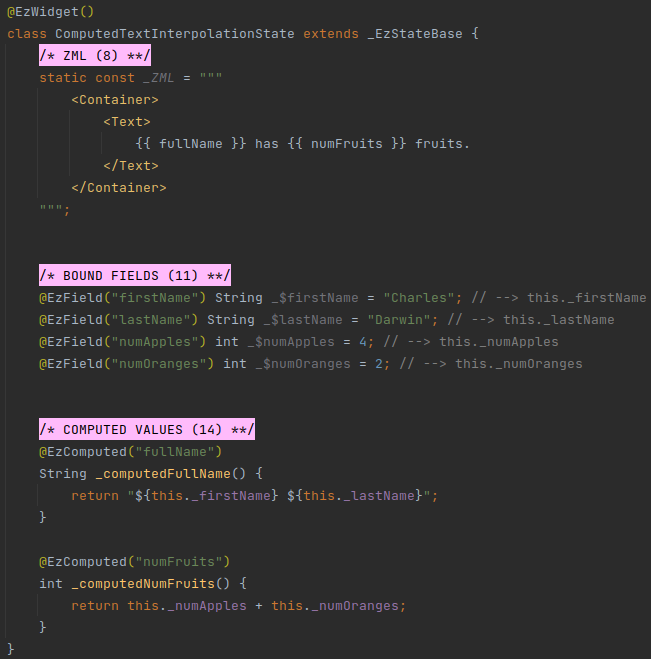 Computed methods can be invoked like any other method.

Alternatively, their last cached value can be retrieved, with the _cached prefix (e.g. this._cachedComputedupperCaseName in the example below).

If we try to get the cached value of a computed method before the computed method was invoked for the first time - ezFlap will invoke it automatically, cache the returned value, and return it. 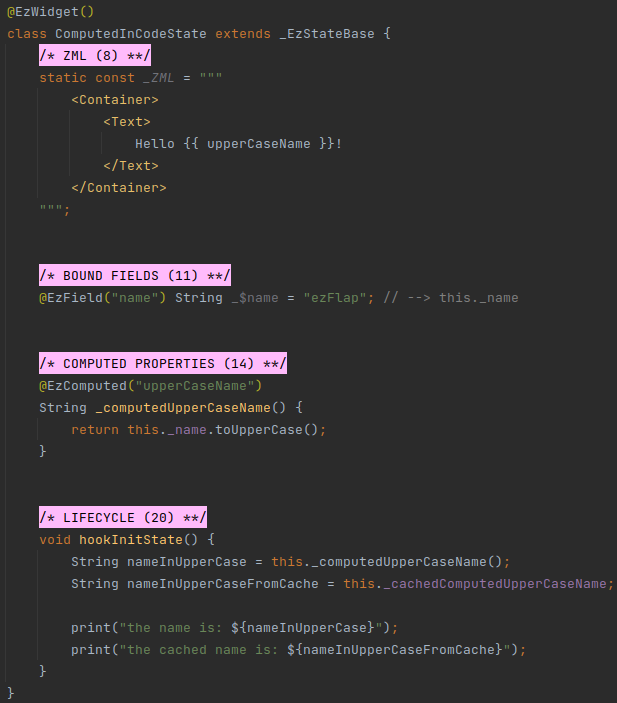