Watches are methods with the @EzWatch annotation.

Watches are invoked when the reactive value they watch is updated. 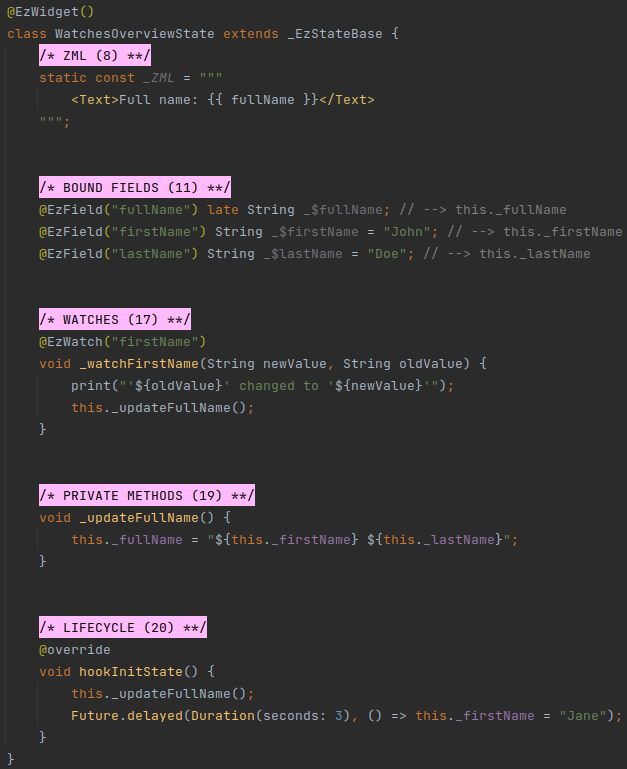 In the above example, firstName and lastName are initialized to "John" and "Doe" in their declarations.

At this point, the text "full name: John Doe" is rendered.

After three seconds, the reactive bound field firstName is set to "Jane".

The @EzWatch annotation of _watchFirstName watch is passed "firstName" as its parameter, and so the watch is set to watch the firstName bound field.

When firstName is set to "Jane", the watch is invoked:

Watches are written like regular Dart methods, and are prefixed with the @EzWatch annotation.

The @EzWatch annotation accepts a single parameter: the Assigned Name of the value that is to be watched.

Watches can watch any type of reactive value:

It's generally best to avoid watches.

One scenario in which watches are useful is when we need to imperatively invoke a function when a Prop changes.

Watches access the data they watch after hookInitState() is invoked.

This means that late bound fields that are accessed when a watch accesses its data must be initialized during hookInitState().