ezFlap widgets have an additional life cycle on top of the native Flutter life-cycle.

ezFlap widgets also have their own high-level hook methods that can be overridden to perform various actions in key points during the ezFlap widget's life cycle transitions:

An ezFlap widget goes through the following ezFlap life-cycle states:

They are covered in detail below.

ezFlap widgets are disposed when the native dispose() method is called (by Flutter).

Like any other native Flutter widget, ezFlap widgets need to perform cleanups and release any resources that don't get released automatically by Flutter when a widget is disposed.

The recommended way to do these cleanups with ezFlap is by registering disposal callbacks, using the onDispose method provided by ezFlap.

In the above example, Timer.periodic is used to increase a counter and print it to the console every second.

The Timer needs to be stopped when the widget is disposed. Otherwise, it will keep running in the background indefinitely.

In the above example, the onDispose() ezFlap utility method is called to register a callback that would be called automatically, by ezFlap, when the widget is disposed, and will cancel the Timer.

When an ezFlap widget is disposed, ezFlap performs the following actions:

To use a hook - override it.

NO NEED TO CALL SUPER HOOKS

The hook functions are for application use.

It is not necessary to call the parent version of the hook.

For example, in the following example, calling super.hookInitState() is not necessary:

The following hooks are available:

Called synchronously from the native initState(), before the first widget build.

Initialize late bound fields and other data that will be accessed during the first build.

When hookInitState returns - the widget enters the Initialized life-cycle state, and shortly afterwards - the widget is built for the first time.

Called whenever the widget is built while in the Initialized state (i.e. before reaching the Ready state).

In some cases we need to perform asynchronous initializations before we can properly render our widget.

For example, we may need to get data from a storage device or an API.

ezFlap supports such cases by allowing to split the rendering of the widgets into two phases:

By default, the same builder is used for both phases (i.e. the content of the widget's _ZML is rendered as defined as soon as hookInitState() is finished).

There are two ways to do this:

The hookBuildInitialWidget hook can be used to return an alternative widget, which would then be returned from the builder instead of the widget's regular ZML while the widget is initializing (i.e. until hookPrepare() is finished).

This hook is called in every build, until the widget reaches the Ready state.

Once the widget reaches the Ready state - this hook is no longer called (and will never be called again for the widget).

If we want to instruct ezFlap to use the regular ZML, even while the widget is being initialized - we can return null from this hook (or simply not override it).

If the hookBuildInitialWidget() hook returns a widget, then even if an _INITIAL_ZML constant is provided for the widget - it is ignored, and the widget returned from this hook is used instead.

The _INITIAL_ZML constant is described later in this chapter.

Called one tick after the native initState() returns.

It may get called before the first widget build (i.e. before the widget is rendered for the first time), or afterwards.

This hook is used to perform asynchronous initializations (e.g. such as calling a web service) that the regular widget's ZML depends on.

It is also ok to perform synchronous initializations in this hook, as long as they are not needed for the initial ZML.

When this hook returns (i.e. after its Future is resolved) - the widget is put into the Ready state.

If a specialized initial ZML was used - ezFlap will now switch to use the widget's regular ZML.

Called after the widget is put in the Ready state (i.e. after hookPrepare() returns).

This hook is used to perform initializations that the ZML does not depend on.

This is the last initialization hook.

Called from the native onDispose() method, before calling the registered disposal callbacks (see below).

This hook provides a method to free up resources or do any kind of cleanup before the disposal callbacks are invoked.

The recommended way to handle cleanups is by registering disposal callbacks, using onDispose().

The cleanup callbacks should be registered right after allocating the resource that needs to be cleaned up.

This approach helps to ensure that we don't forget to clean up, and keeping the initialization and cleanup code together makes the code more maintainable.

Initial ZML is a ZML snippet that is used instead of the regular widget ZML while the widget is initializing.

The initial ZML is used until the widget reaches the Ready life-cycle state.

An initialization-time widget can be provided by the hookBuildInitialWidget hook, but the recommended way is to provide it in the form of ZML markup instead.

Initial ZML can be provided in two ways:

The two ways are mutually-exclusive. 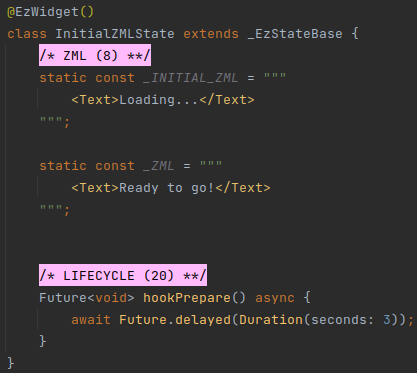 In the above example, the text "Loading..." will appear while the initial ZML is used.

The initial ZML will be used for three seconds (i.e. until hookPrepare() returns), after which the text "Ready to go!" will appear.