ezFlap has built-in support for:

Services are semi-mocked: the mock class must extend the original service class.

A mock class can override all of the original service's public methods.

Note: when the tested widget calls a service method that wasn't mocked - the original method's code is invoked. 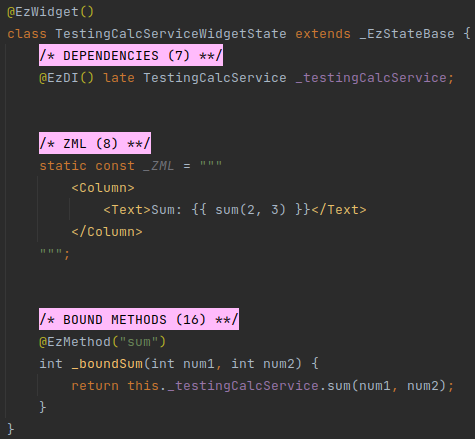 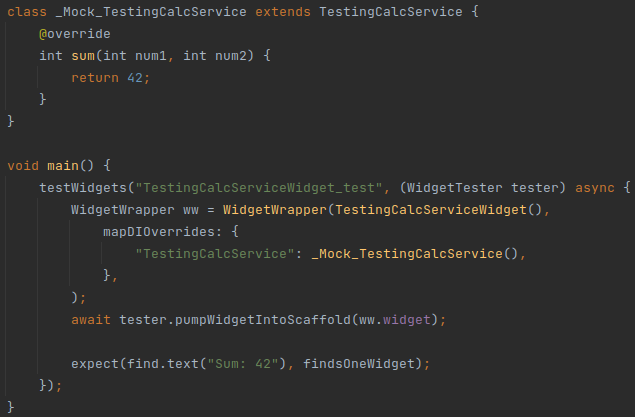 This mixin offers some utility functions that can be used by mocks to keep track of invocations of the mocked service's methods. 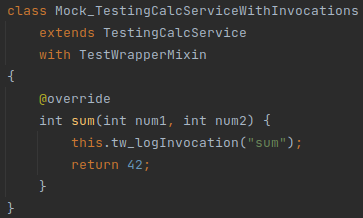 In the above example, TestWrapperMixin.tw_logInvocation() is used to log every invocation of the sum() method. 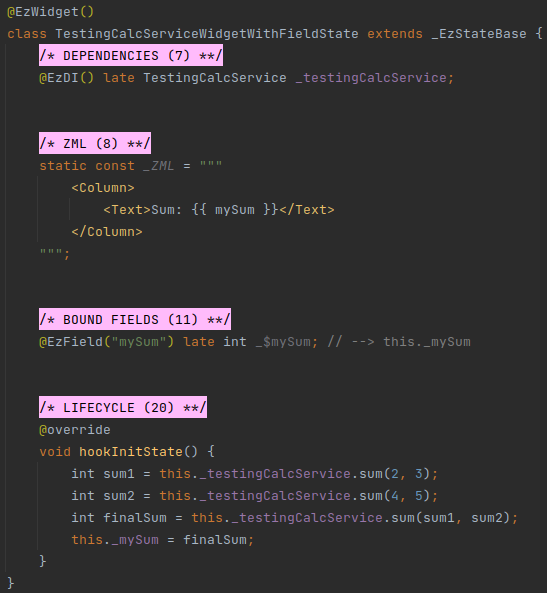 In the above example, TestingCalcService.sum() is invoked three times. 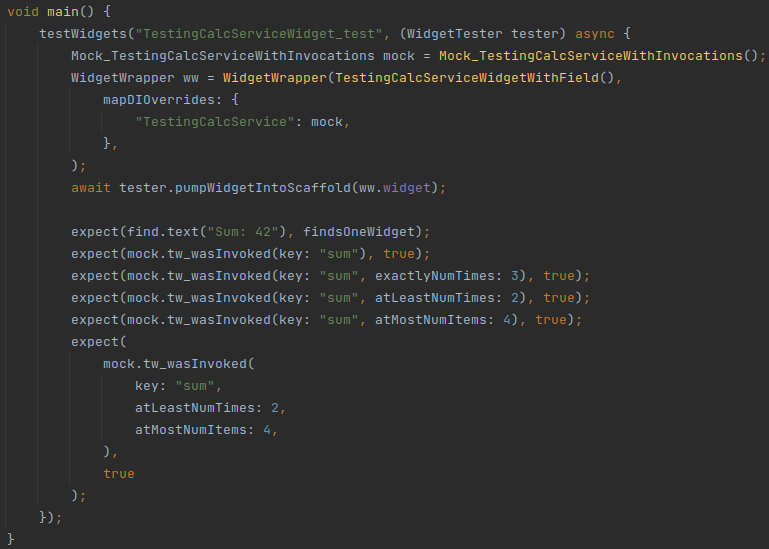 The above example shows the different ways to check whether a certain mocked method was called, and how many times, using the TestWrapperMixin.tw_wasInvoked() method with various combinations of its named parameters:

Only key is mandatory.

When the exact, minimum, and maximum number of times are not specified - tw_wasInvoked() will return true if the method was invoked at least once.

TestWrapperMixin allows to record additional data alongside the logging of method invocations: 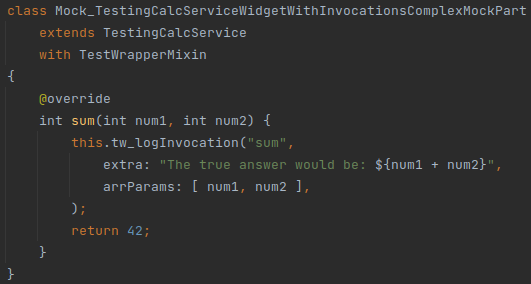 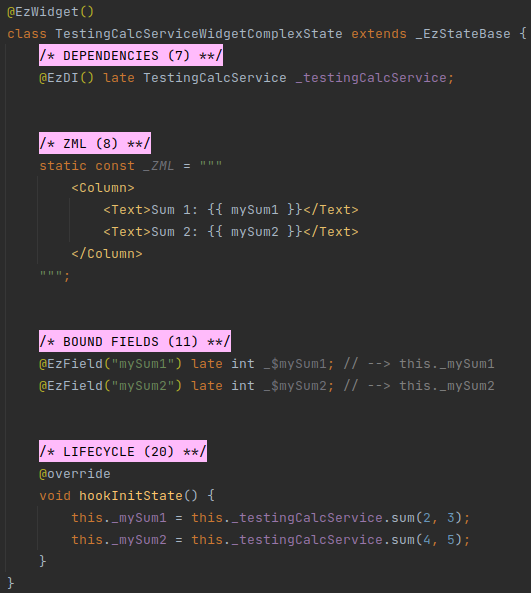 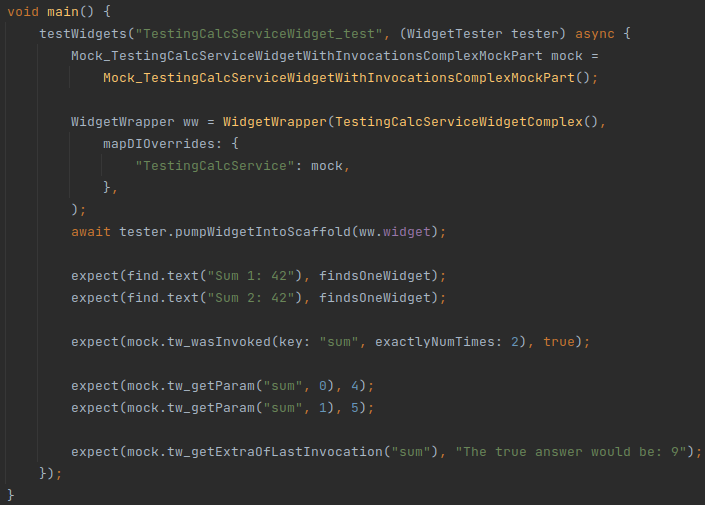 When testing an ezFlap widget, all of its hosted ezFlap widgets will be instantiated as they would in the real application.

Sometimes we may want to mock such hosted ezFlap widgets during a test, or even to just "disable" them (i.e. make the widget that is being tested not instantiate them).

The simplest form is to just prevent a hosted widget from being instantiated: 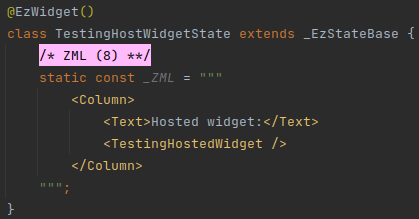 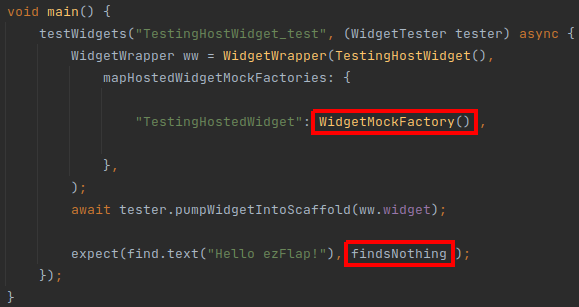 As seen in the above example, mapHostedWidgetMockFactories expects:

The simplest way to use it is as seen above - instantiate it without any parameters and pass it to mapHostedWidgetMockFactories.

In such case, the hosted TestingHostedWidget widget will be replaced with an empty Container.

If we want to have TestingHostedWidget replaced with a different widget - we will provide a builder function to WidgetMockFactory's constructor, in the funcWidgetFactory parameter:

In rare occasions, we will want to actually have the hosted ezFlap widget replaced with another ezFlap widget.

This is mainly useful when the widget we are testing obtains a reference to its hosted widget (i.e. using @EzRef), and invokes public methods that the hosted widget exposes.

In such case we may want to not actually render the hosted widget, but to make a mock available to the tested widget, because it may have code that relies on the @EzRef field being populated, and will crash if it's not.

We may also want to capture calls to the hosted widget's public methods, to verify that the host widget behaves correctly, and also to return sensible values to it (again, so that it won't behave incorrectly, or even crash).

Mocking a hosted widget consists of the following steps:

We will go over these steps one by one, in the following examples:

An abstract class that declares the public functions that can be mocked: 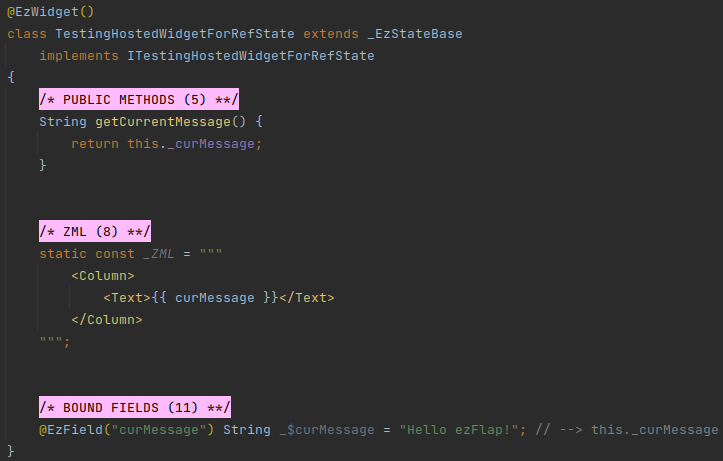 The type of the @EzRef field in the host widget is set to the interface (i.e. ITestingHostedWidgetForRefState?): 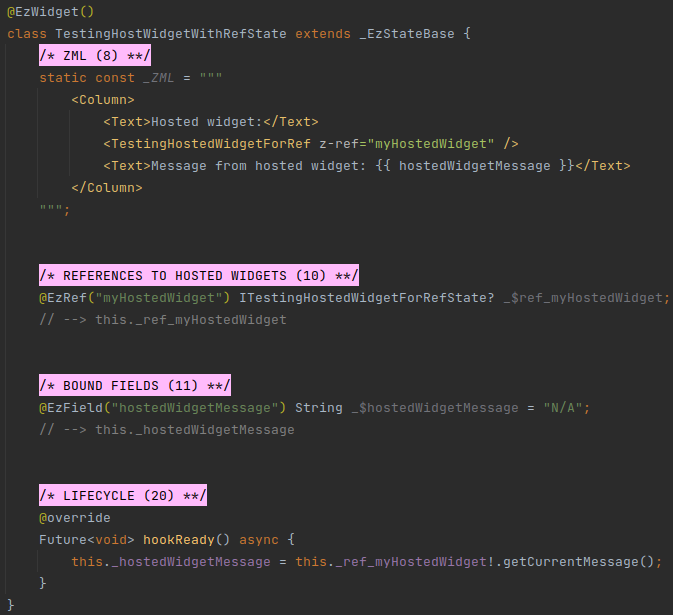 WidgetWrapper offers method to access and interact with mocked or "disabled" hosted widgets.

The to-be-disabled hosted widget has a couple of props defined. 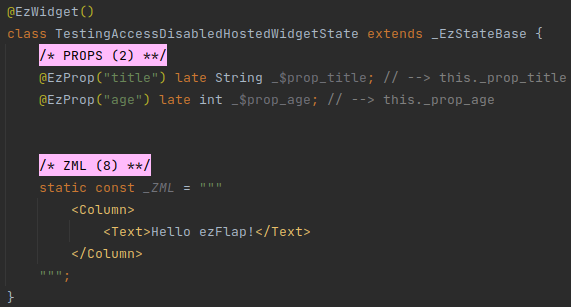 The host widget provides values for the hosted widget's props. 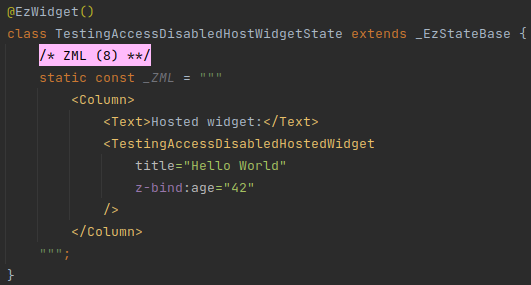 The test disables the hosted widget by using the WidgetMockFactory class instantiated with the defaults.

Then, it gets the instance of WidgetMock (described later), which provides utility methods for getting information concerning the mocked widget.

Then, it verifies that both props were actually populated (i.e. by the host widget), and also verifies their values. 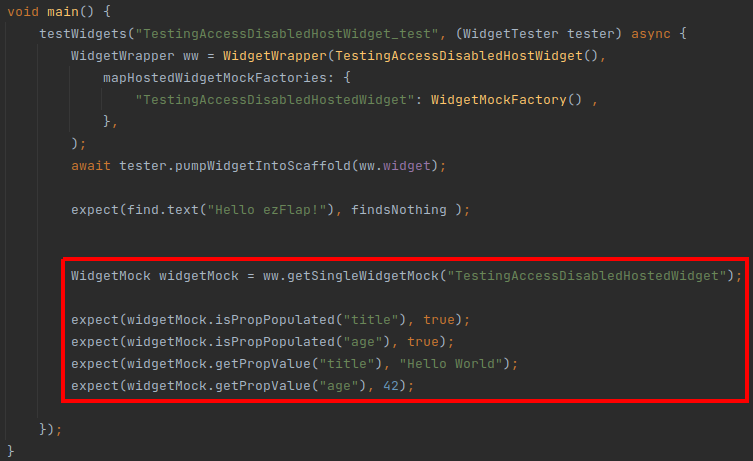 The WidgetMock class is created and initialized automatically by ezFlap, and is used as a container around a widget mock.

It provides the following methods: