ZSS is a simple XML-based language that is used alongside ZML to construct a widget tree.

ZSS allows to separate styling markup from structure/logic markup, in a similar way to how CSS moves styling code out of the HTML.

The ZSS language consists of: 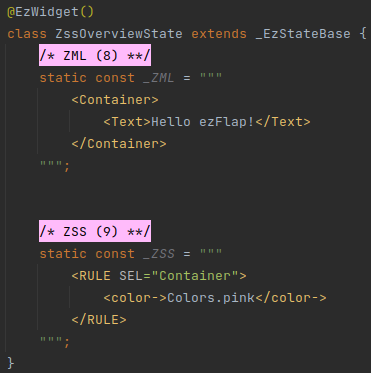 In the above example, the text "Hello ezFlap!" will appear on a pink background.

In most of the examples in this chapter, the ZSS is provided alongside the ZML, in the same class.

However, it is possible, and convenient, to keep ZSS code in separate files.

This is covered later in this chapter.

An incomplete list of the differences from CSS selectors:

To match tags according to their names, we write the tag's name as-is in the selector.

A selector can contain multiple parts, separated by spaces. The last part in a selector must include a tag name.

Match all Containers in the widget:

Match all Containers that are inside a Row: 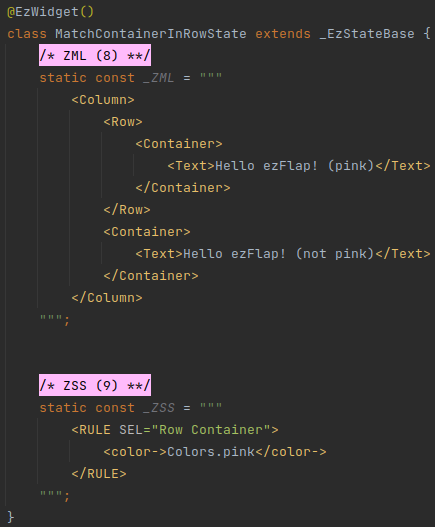 The above ZSS matches also matches Containers that are not direct children of the Row: 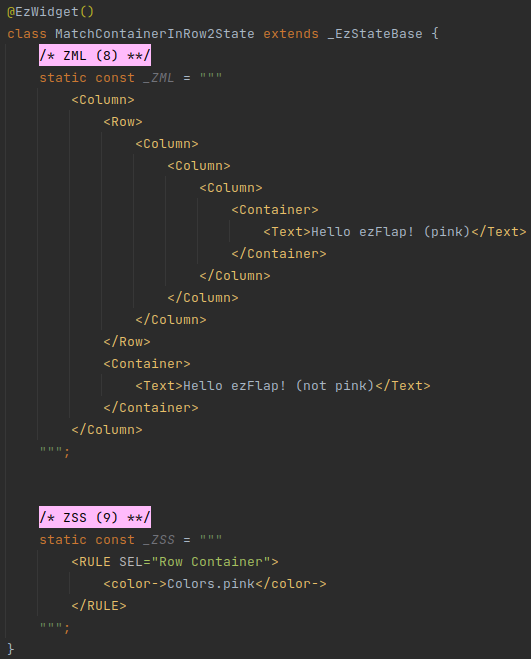 Selectors can also match by classes.

Match by a single class: 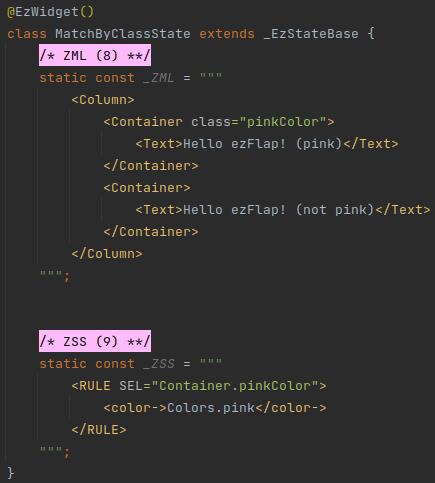 Match by multiple classes (i.e. the class tag would need to have all of the listed classes): 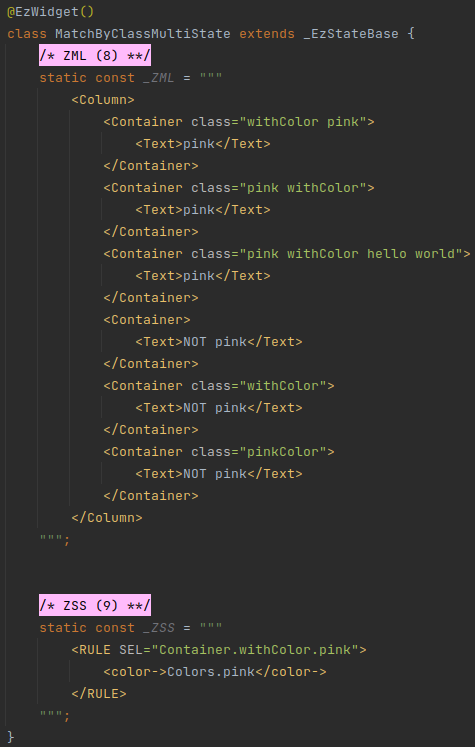 Selectors can also match by attributes.

Match by a single attribute: 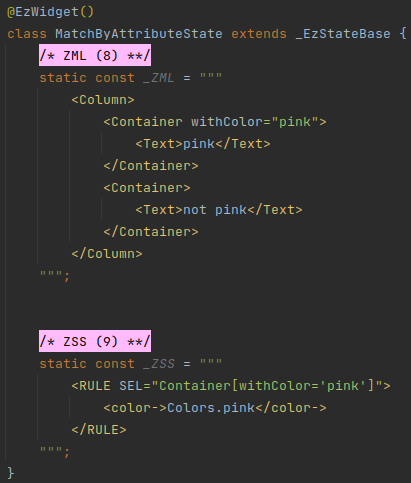 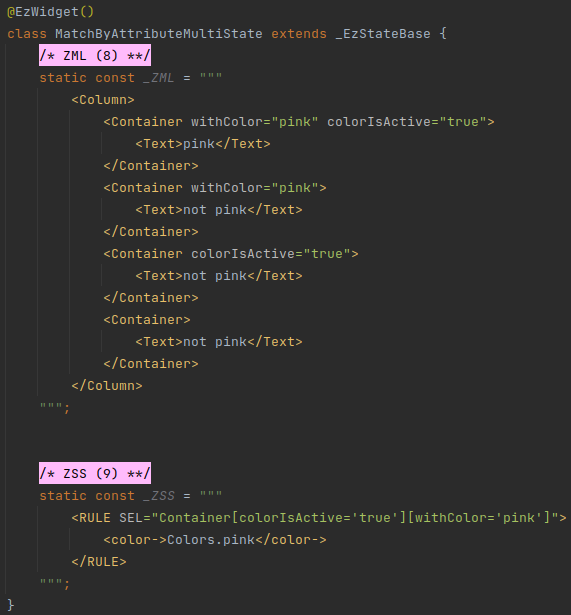 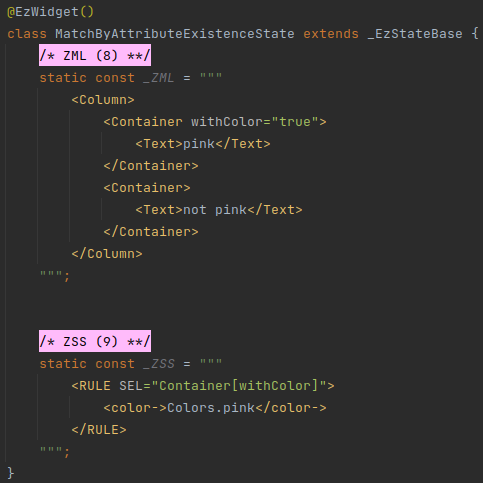 In the examples so far, the classes and attributes are all hardcoded, and so ezFlap handles the matching when it compiles the ZML (i.e. and not in runtime).

It is often useful to apply styles conditionally with runtime conditions.

For example, we may want to apply a red border to a TextField when its content is invalid.

ezFlap allows to match against dynamic classes and dynamic attributes, whose values are not yet known when the ZML is compiled.

The class attribute accepts a hardcoded space-delimited string of classes.

To provide the classes dynamically, we add the z-attr prefix and set the value of the z-attr:class attribute to the Assigned Name of a reactive value of type Set<String>.

Each item in the Set will be treated as a class that is applied to the tag. 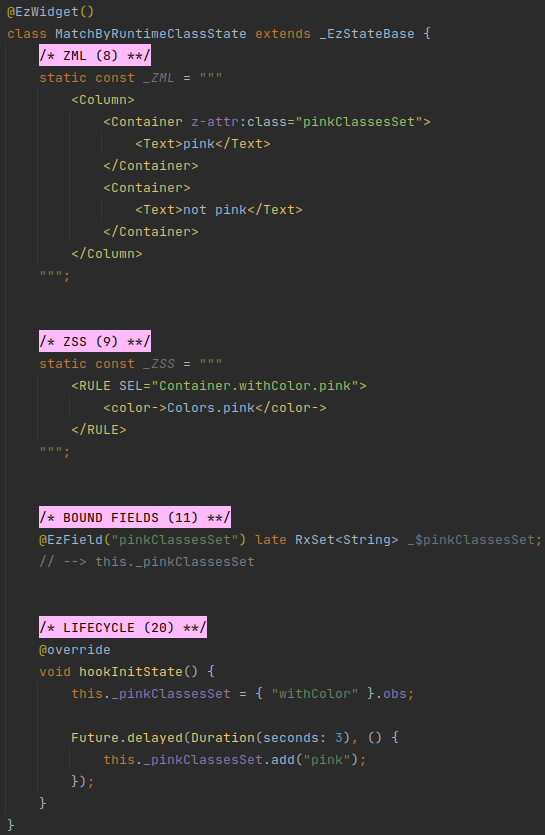 In the above example, pinkClassesSet is first initialized with the class "withColor".

The ZSS rule requires the Container to have both "withColor" and "pink", so its background remains white.

After three seconds, the "pink" class is added to pinkClassesSet, and the Container's background turns pink.

Note that pinkClassesSet is of type RxSet<String>, and not Set<String>.

This is necessary because we want the contents of the set to be reactive, so that the UI will update when the "pink" class is added.

In the above example, withColor is a prefix-less attribute with the hardcoded text "pink", and it is matched by the Container[withColor='pink'] selector.

When using interpolation, the matching is done in runtime, by the evaluated, interpolated text. 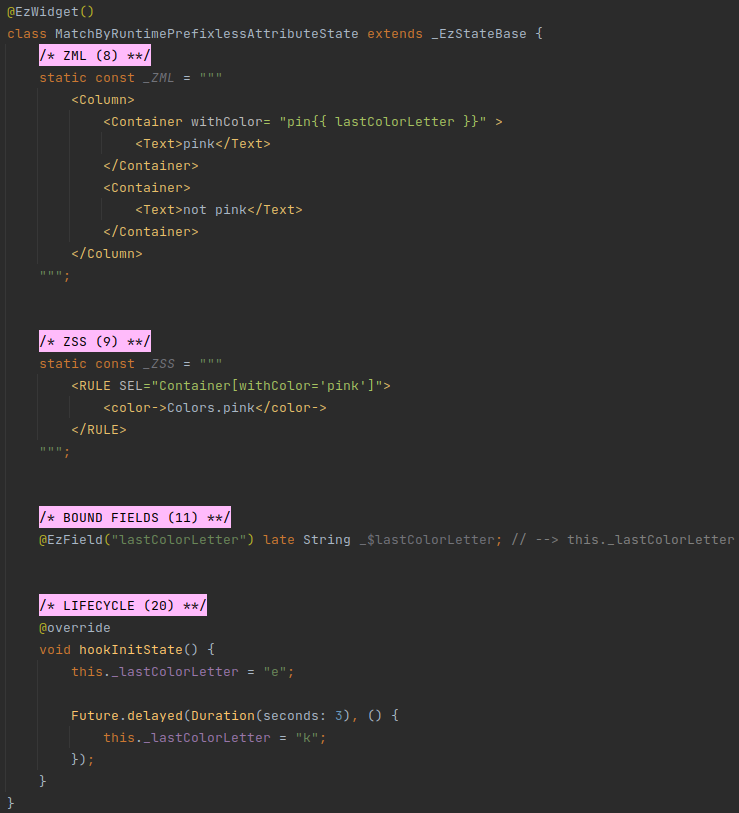 So far we have seen ZSS applied by prefix-less attributes.

ezFlap can also match ZSS by dynamic attributes whose values are known only in runtime.

Prefix an attribute with z-attr to make it dynamic. 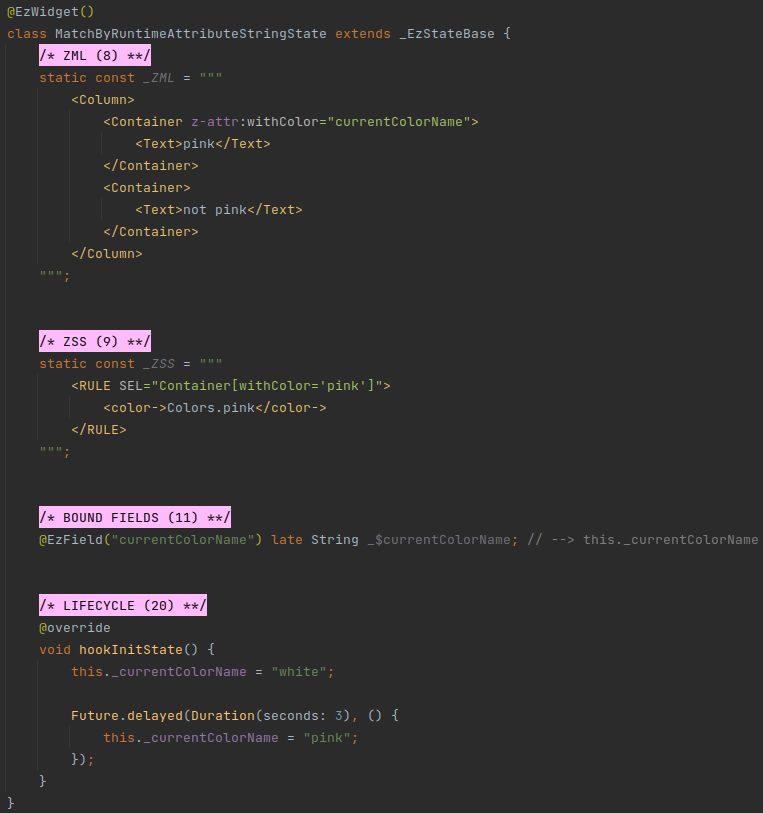 When using z-attr, the value is interpreted as a Dart expression: 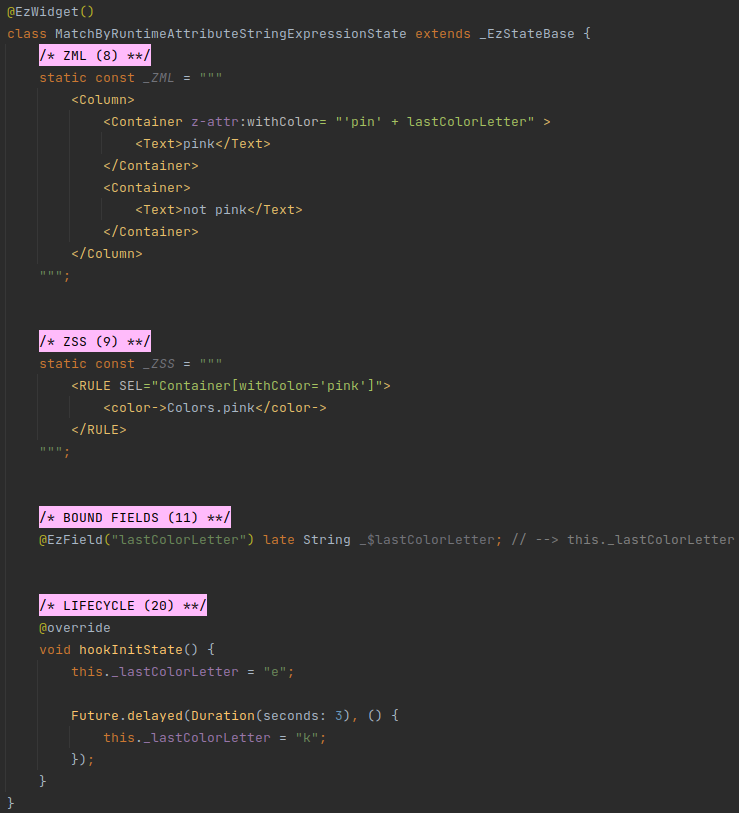 It is also possible to match non-String values. 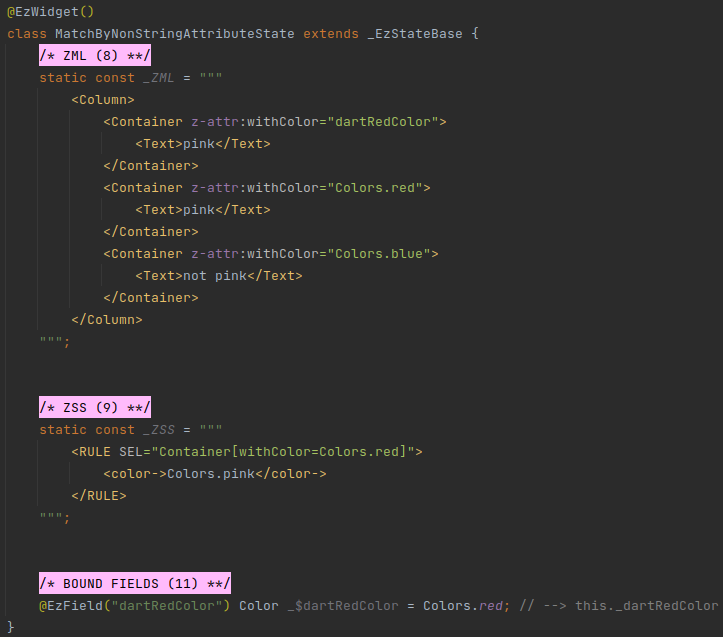 In the above example, the ZSS rule matches Containers that have a withColor attribute with the value Colors.red.

Observe how the selector does not have quotes around Colors.red: SEL="Container[withColor=Colors.red]".

When matching by non-String values - omit the quotes.

Note that spaces in the expression are not supported.

Another useful case is when using an enum: 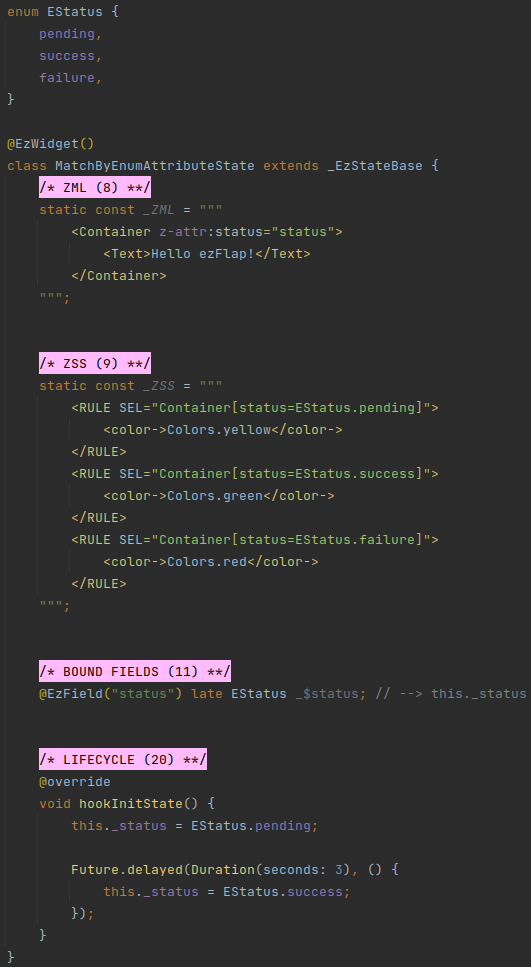 In the above example, the background color starts out as yellow, and after three seconds changes to green.

For example, if the ZSS references an invalid enum value - the application will not compile.

When a ZSS rule is inside another ZSS rule - its selector is combined with the selector of the parent rule.

The two selectors can be combined in two ways:

When a rule is contained in another rule, by default, its selector is appended to the right of its parent selector, with a space between the parent rule's selector and the nested rule's selector.

This is similar to cascading selectors in SCSS. 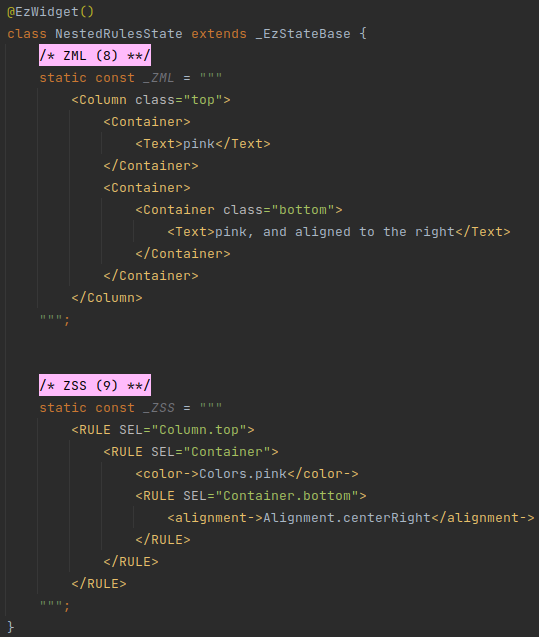 The above example shows three rules. Two of them are nested, and have the named parameters color and alignment to apply to matching tags.

The effective selectors of these rules are:

Note that the inner-most Container (the one with the bottom class) matches both the middle and the bottom rules, and so the named parameters of both rules are combined and applied to it.

By default, selectors of nested rules are concatenated together, but their parts are not merged in any way. 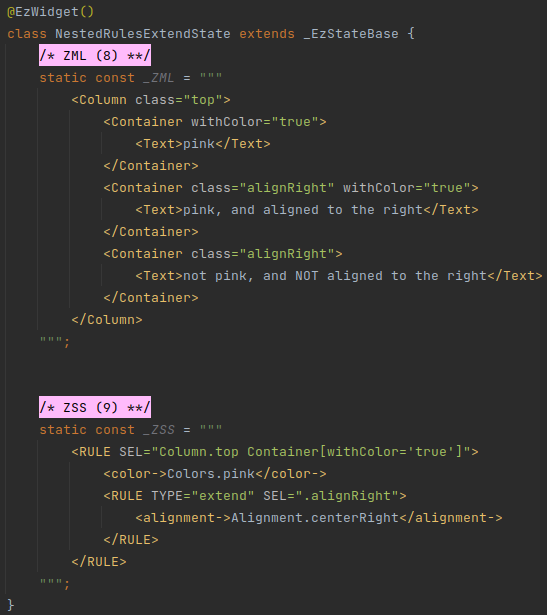 The effective selectors of the rules in the above example are:

Note how the last Container is neither pink nor aligned right, because it lacks the withColor='true' attribute, which is required by the top selector.

When multiple rules match a tag, the named and positional parameters of the rules are merged, and then applied to the tag.

When some named or positional parameters are provided from multiple rules (i.e. when there are conflicts) - ezFlap determines which rule takes priority by looking at:

This is similar to how CSS styles are applied to elements in HTML.

The specificity of a selector is calculated as follows:

If multiple rules have the same specificity - the rule that appears last in the ZSS will get the highest priority.

The priority of rules only matters when these rules have conflicting parameters to apply.

For example, if two rules have the <color-> named parameter, one with the value Colors.red and the other with Colors.blue - the color provided by the rule with the higher priority will be used. 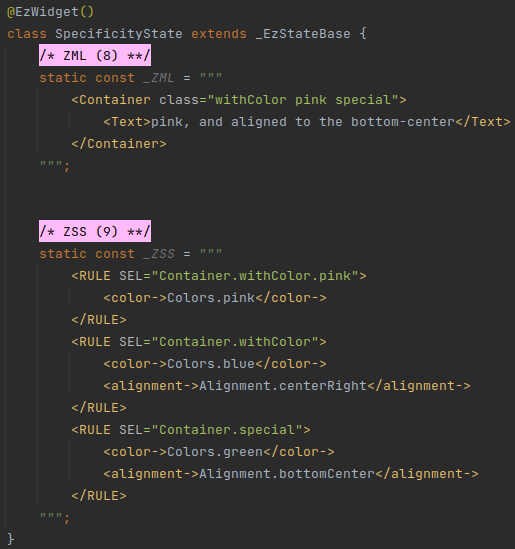 In the above example, the first rule (Container.withColor.pink) has a specificity of 201.

The second rule (Container.withColor) has a specificity of 101.

The third rule (Container.special) has a specificity of 101 as well.

Therefore, the first rule gets the highest priority and overrides the <color-> of both other rules.

ZSS rules can contain named and positional parameters that would be applied to their matching tags.

ZSS rules' parameters are the same as named and positional parameters in the ZML.

They have the same syntax, and the same principles.

Further, just like in ZML, it is possible to:

It's best to keep logic in the ZML, and styling in the ZSS.

Mixing them together will make the code harder to reason about and less maintainable.

When working with hardcoded classes and attributes, ezFlap can do the ZSS rules matching when compiling the ZSS, and generate code that instantiates the widget with the applied parameters.

However, when working with dynamic classes and attributes (i.e. whose values can only be determined in runtime) - ezFlap cannot match while compiling.

Instead, ezFlap generates Dart code that applies the necessary logic, in runtime.

Consider the following ZSS and ZML: 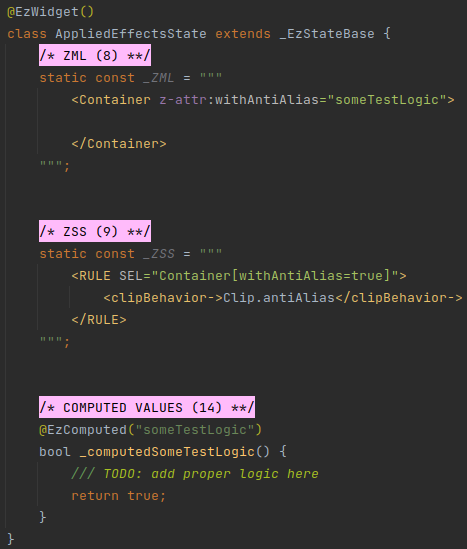 ezFlap uses the ternary operator to apply parameter values conditionally, and will generate something like this:

The Clip.antiAlias part comes from the applied rule.

The Clip.none part is added by ezFlap automatically as the alternative option, for which no ZSS is supplied, because Clip.none is the default value of the clipBehavior parameter of a Container's constructor.

ZSS can be provided from multiple sources:

It is possible to combine multiple sources together. In such case, the ZSS from all sources will be concatenated according to the priorities of the sources (described later in this chapter).

A widget's ZSS can be provided as a string in the _ZSS constant. 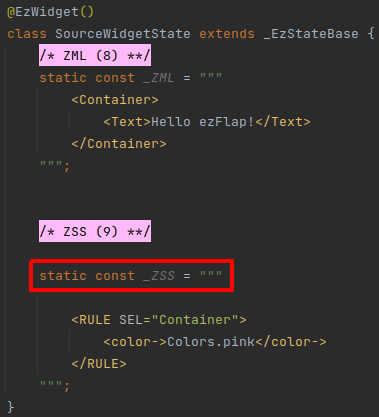 The two parameters can be used individually or together.

In the above example, the ZSS is defined in SourceAnnotationSingleZss.dart and is provided to the widget via the zss parameter of the @EzWidget annotation.

Note that the names of the SourceAnnotationSingleZss.dart file and the class in it are arbitrary. The only requirement is to provide a ZSS in a const String value to the zss parameter. 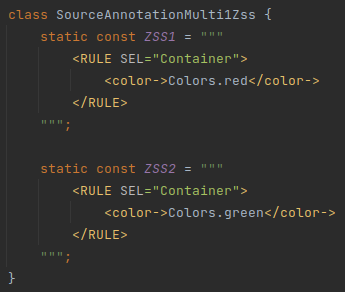 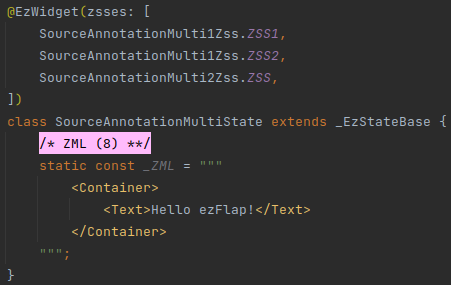 If a _ZSS constant is provided in the widget, then it receives a higher priority than all other ZSSes.

The last way to apply ZSS to a widget is by placing a .zss file in the same folder or in a parent folder of the widget. 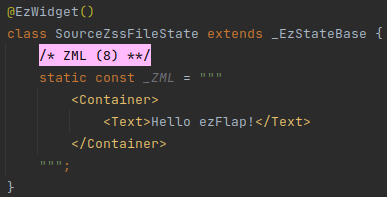 If the Global.zss file is placed in the same directory as SourceZssFile.dart, or above it (under the project's root path) - the ZSS in it will be applied to the SourceZssFile widget.

ezFlap cannot automatically re-generate code for the widgets that depend on the ZSS in a .zss file.

When a .zss file is modified - the change will apply in widgets that use that ZSS the next time they are built.

It is recommended to use .zss files sparingly, and only for relatively global styles.

.zss files have lower priority than all other methods of providing ZSS to a widget.

Among .zss files, the closer a .zss file is to a widget (i.e. the less directory levels there are between them) - the higher the .zss file's priority will be.

Applying parameters to tags with ZSS does not have a significant performance penalty.

Matching logic that can be applied in advance is applied during compilation and doesn't incur runtime costs.

Selectors that can be completely ruled out at compile time are ruled out.

Selectors that must be matched at runtime require having a ternary operator for each parameter, on each class tag that is a possible match (i.e. according to the tag name, hardcoded classes, and hardcoded attributes).

Additionally, applying a parameter from ZSS involves a local function call (in runtime).

This added overhead should not make a difference for anything but highly time-critical applications.

Attribute comparisons are a little more efficient than class comparisons, because the latter require Set comparisons.

Keep in mind that when a tag has dynamic class or attributes - it can significantly increase the number of potentially-matching selectors, and could add a large number of conditions to the generated code.

In the above example, it may seem clear that the z-attr:class="curAlignmentClass" attribute on the Container is meant to contain either the "alignedRight" or the "alignedLeft" class, but technically, any of the colors could match this Container as well. 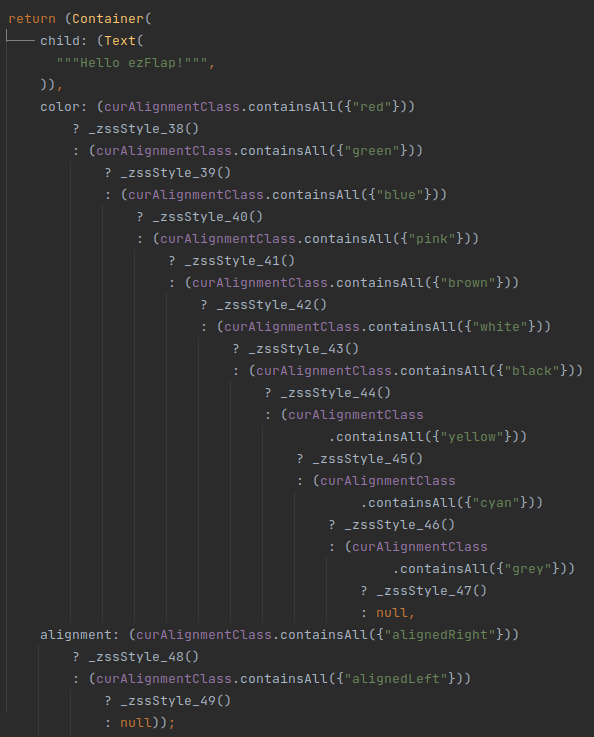 The same situation could also happen with attributes, but it is less likely, and easier to avoid, because every category of possible values will likely have its own attribute (e.g. z-attr:status for statuses, and z-attr:currentAnimal for pets).